Here’s all the news you may not have heard about, but which you should definitely care about. It’s been a fairly uneventful week, but we did see two different racist groups on campus, and one kind show of solidarity.

Last Thursday, as this statement brought to our attention, the Central Intelligence Agency was on campus. Through a collaboration with Services for Students with Disabilities, the CIA held informational and personal advisory sessions to present “opportunities for students,” and “full-time employment opportunities.” The advisory sessions promised 1-on-1 interactions with a CIA agent for students interested in the CIA’s “national security mission.”

Recruitment sessions like these are indicative of the imperialist applications of shallow “diversity,” efforts, as well as the University’s priority regarding who is included in that “diversity.” To the University, the State, and institutions like the CIA, “diversity,” is a useful tool to pacify opposition and strengthen their power. The veneer of multiculturalism and inclusivity serves as a powerful tool to erase the violence that lies at the core of institutions like the CIA. While the CIA may include disabled people as employees (selectively), its everyday operations facilitate wars, coups, assassinations, and instability which destroy the lives of people in the Global South. Ableism and imperialism are inter-related; the actions of the CIA produce conditions that uniquely harm or mark precarious the lives of disabled people in the Global South, whether through wars & instability which produce impairment and trauma or through the imposition of neoliberal imperatives which leave disabled people among the poorest populations in the world.

To institutions like the CIA and to the University writ large, marginalized people are valuable for “diversity,” when they can add some new source of value or utility to the institution. Whether that value is produced through the ruse of multiculturalism, increasing staff numbers, or producing valuable citizens to protect US imperial interests, it is an approach built on value. Conversely, disabled people who pose no value to the State are, at best, neglected. Disabled people of the Global South are one such example. Even amongst disabled students, the CIA & UT are selective. The advisory sessions were only open to students with a 3.0 GPA, something which many will recognize as an implicit way of excluding many of the disabled students at UT who, due to ableism and an inaccessible campus environment, may not meet that qualification. So even as the CIA claims to value diversity, it only wants to selectively incorporate disabled people into its imperial project.

There was no protest of the CIA presence on campus. However, some students did put up flyers around the area of the Student Services Building to criticize the CIA’s presence. While there are no photos online that we know of, the students alerted us to their actions and shared the flyers themselves, which we republish here.

The CIA was also reportedly on campus the week prior to speak to students in the Arabic department. However, this is less surprising due to the long history of CIA surveillance of area studies departments, as well as the origins of area studies itself in Cold War geopolitics. 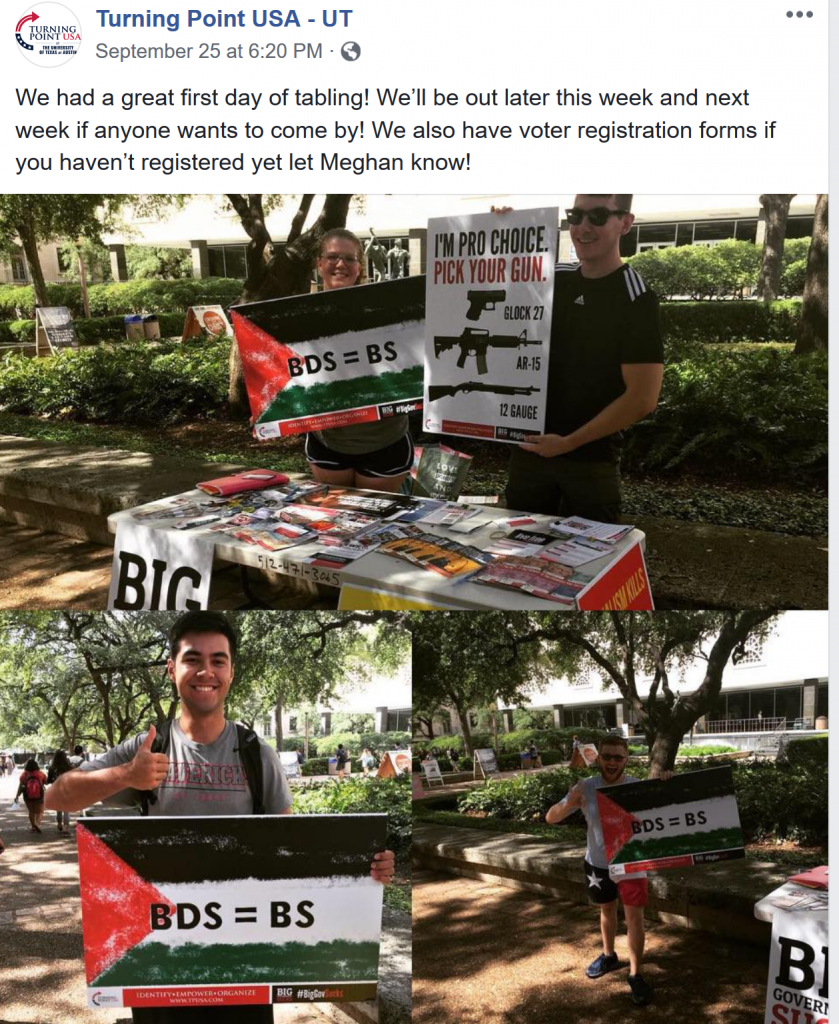 The new chapter of Turning Point USA here at UT, which just became a registered student organization this fall, kicked off their attempts to have a presence on campus by tabling on West Mall last Tuesday. They tabled with signs saying “I’m pro-choice, pick your gun,” and “BDS = BS.” Meghan Lovett, the founder of the local chapter who we wrote about earlier in the summer, was spotted tabling alongside Benjamin Larrabee, a non-student TPUSA recruiter. According to one student who walked by, it appeared that the group had been confronted by someone. A few cops were on standby close by, watching over the group, and some people in the area made passing reference to someone who tried to fight the group. From the available information, it appears no arrest was made. Another student passing by happened to vomit on their table, bringing an end to their activities for the day. As Turning Point gears up to become more active on campus, establishing another pole for the right-wing student movement beyond the College Republicans and the Young Conservatives of Texas, we can expect to see similarly agitating propaganda or actions–such as the “Free Speech Balls,” and fascist speakers they have hosted at other campuses. 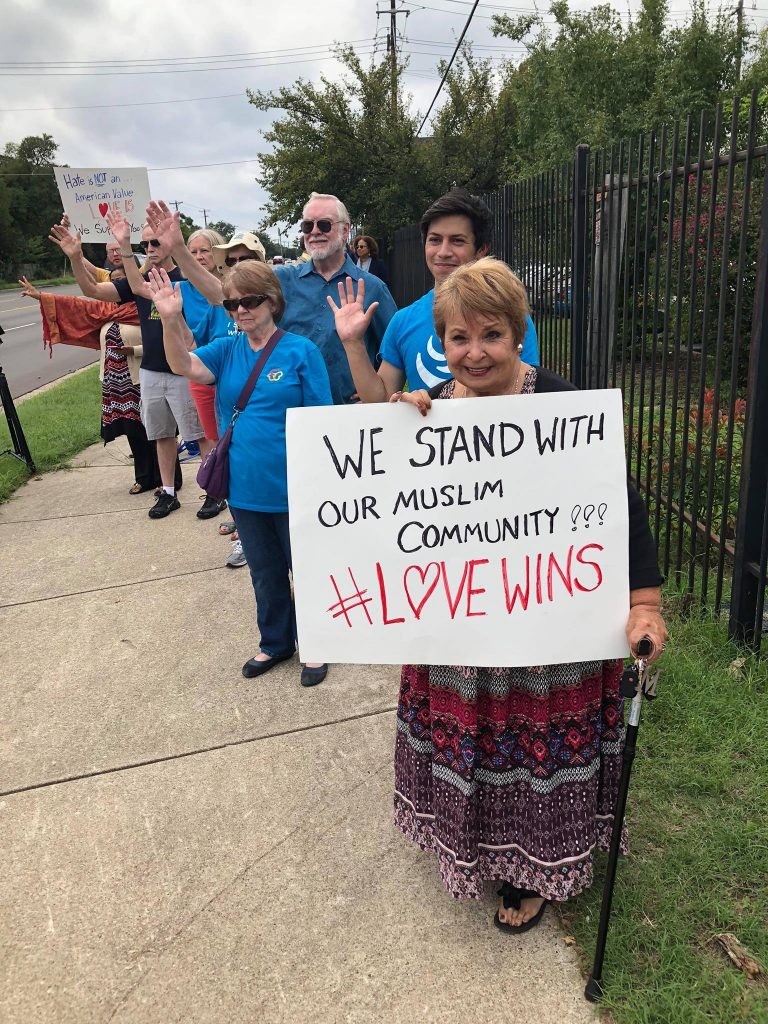 On Friday, the Muslim day of worship, a small interfaith crowd gathered outside of the North Austin Muslim Community Center in a show of solidarity with the local community. The center was recently subjected to Islamophobic attacks and vandalism. The solidarity event, organized online by a group known as Muslim Solidarity ATX Events, consisted of a press conference and a “human chain,” where demonstrators greeted those coming to pray and handed out carnations to show solidarity. Many of the signs and statements made during the event emphasized peace and co-existence across differences. While much of the rhetoric was liberal, the event was a genuine show of solidarity and relationship building with the local Muslim community.