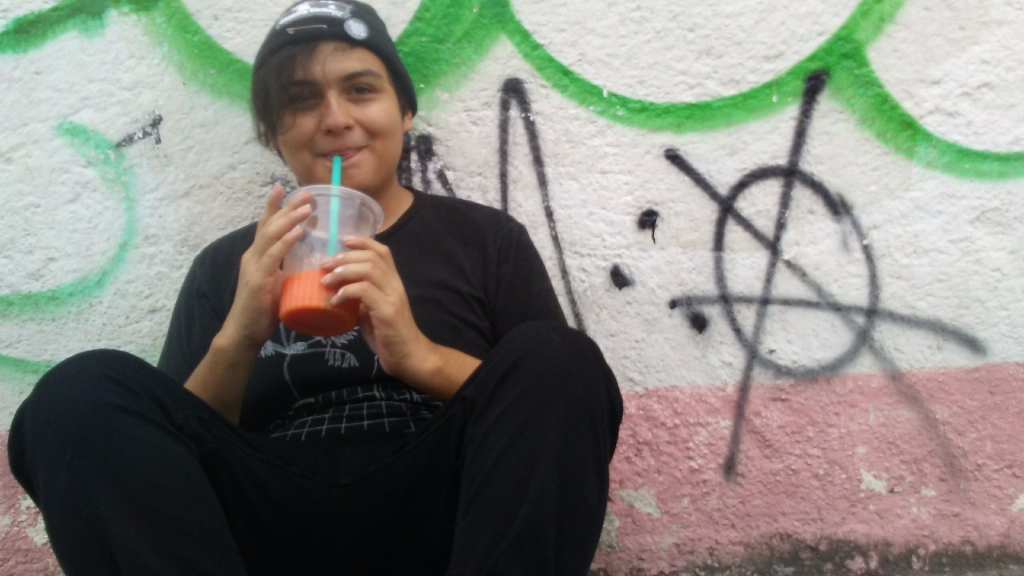 Sergio Salazar, also known as Mapache, was deported to Mexico on September 14th. Detained by ICE in early August and interrogated by the FBI, Mapache “chose” deportation (as much as a choice made in captivity can be a choice) so that he could be outside of the walls of a prison. This came after DHS made multiple appeals to prevent Mapache from receiving bond or taking voluntary departure, on the basis of tweets which they claim showed he was a dangerous person–tweets quoting songs lyrics from the Black Panthers or anarchist themes.

Upon release, Mapache was greeted by comrades and has found a support network to help him get back on his feet. He recently did an interview with It’s Going Down talking about his experiences and the brutality of the border regime & deportation machine. He remains proudly anarchist & a revolutionary dedicated to the total liberation of all peoples, and we’re certain to see him mobilizing wherever he is!

While Mapache is out of the cage, it would be a political error to say he is free. He is currently banned from re-entering the US for 10 years. The border, and the policing regime that upholds it, serves as a barrier separating Mapache from his home, family, & friends. The border itself is a cage, one that serves to lock people outside the country rather than hold them in. Nevertheless, it is good to see Mapache out and doing better amongst comrades. In Mapache’s spirit, fight for a world without borders, nations, and deportations!

Check out Mapache on Twitter and show him some love!

Help support Mapache as he establishes a new life for himself and donate here!

The North Austin Muslim Community Center first saw one of their members get their tires slashed. They thought it must be an isolated event, and had no leads. Then, less than four days later, they found their mosque with six shattered window panes, including those on the front doors and the women’s entrance on the other side of the building. Police and news sources were hesitant to label the incidents as islamophobic. Then, within 48 hours of the vandalism at the mosque, the New Madina Market– which sells middle-eastern goods–had their front doors smashed around 1 A.M. None of these incidents had evidence of intent to enter or steal, indicating that they were straightforward acts of vandalism. The incidents have been linked by security footage placing one individual, pictured above, at the scenes of the crimes. Most recently the North Austin Muslim Community Center had more care tires slashed and a fence damaged on September 13th.

Incidents like these tend to expose the white supremacist presence that exists in Austin in spite of the liberal reputation that precedes it. With a national political environment in which racist and white supremacist ideas are emboldened, Austin’s uglier sides have come out, to the chagrin of Austinites who enjoy the comfort of believing they live in a liberal and socially just city. This incident is not isolated from a local context. It comes on the heels of recent racist activity in Austin and across Texas. Last summer, the Islamophobic group ACT for America attempted to hold a “March Against Sharia Law,” which was shut down by an antifascist response. In early September, far-right Patriot and neo-confederate groups like Nomad SAR, Texans United For America, and Texas Patriot Network protested outside of the Islamic Society of North America convention in Houston–they, too, were drowned out by counter-protestors. Recently leaked audio revealed that these groups planned to attack muslim convention attendees & counter-protestors. Their rhetoric and actions have contributed to the backdrop that enabled these hate crimes to occur. It would not be surprising if the Austin mosque vandal was himself inspired or provoked to action by the rhetoric & actions of groups like Texas Patriot Network.

A report from the Center for the Study of Hate and Extremism found that hate crimes reported to police increased by 12.5% in 2017, demonstrating how the country’s political climate is becoming increasingly toxic. This trend has been especially problematic in relation to anti-muslim actions. The Council on American-Islamic Relations reports that just between April and July of 2018, anti-muslim incidents jumped 83% nationally. The Austin police and some of the media are hesitant to label incidents like these as hate crimes because it contradicts the image of Austin they want to portray, effectually trying to turn a blind eye to the undercurrents rising around them.

On Saturday, September 22nd, a group of fascists held an abnormal pity party in downtown Austin. The “Free Alex Jones Rally,” hosted by Patriot Prayer, brought out a strange assortment of alt-lite fascists and Infowars weirdos to protest Alex Jones being banned from practically all social media. By “Free Alex Jones,” they mean free him from Twitter jail.

Patriot Prayer is not a local group–they’re actually based in the Portland, Oregon area. They are a violent, fascist group that traffics in dog-whistle politics and attack vulnerable people in the streets. They regularly cloak their events in the rhetoric of nationalism, patriotism, and “free speech,” and claim to be non-fascist and non-racist while their events regularly attract groups as far-right as outright Neo-Nazis. Most recently, at a June rally in Portland, Patriot Prayer & the Proud Boys were seen Sieg Heil-ing and making calls to violently attack immigrants.

The crowd on Saturday included members of the aforementioned Proud Boys, violent fascists like Charlottesville-attendee Christopher Ritchie, and affiliates of the Texas Patriot Network. The crowd, which numbered somewhere between 50-100 people (generous estimates) waved Trump & American flags, sang along to “We Will Rock You,” and hosted an embarrassing attempt at a dance party beneath overcast skies. Attendees flashed fascist hand-signs such as the “okay” symbol and wore “Pinochet Did Nothing Wrong” shirts. After listening to a few speakers, the crowd marched quietly to the facebook headquarters where they milled about awkwardly for a few minutes and held signs to “protest” the company. They then returned to Woolridge Park, where they were addressed by Alex Jones himself. The speeches included various references to the “globalist elites,”–an anti-semitic dogwhistle–who allegedly conspire against Jones, conservatives, and patriots.

The rally ended uneventfully. There was no mass antifascist response, although some attendees seemed to come prepared for a confrontation with antifascists with signs and the occasional shield. While Patriot Prayer & the Infowars milieu are full of despicable figures, many antifascists felt that showing up to counter their rally would be a waste of efforts. Some felt that the threat level and importance of the rally was minimal, and decided to take the day off to let the right have their pathetic parade for Jones. Some humorous antifascists were in the area observing the event and described it as a “pretty flaccid affair all around.” They even created a nice little handout, featuring a printable paper doll of Jones himself.

After the rally, the the fascists hung out at their regular watering hole, the Dirty Dog Pub. At the rally, they discussed plans to march around 6th Street with American flags and antagonize passerby, presumably to instigate a fight and claim discrimination. While out on 6th Street, the fascists got into a verbal confrontation with an employee who called them out for being racists. The confrontation almost turned physical, before the police separated the two groups. The fascists whined for a while then moved on.