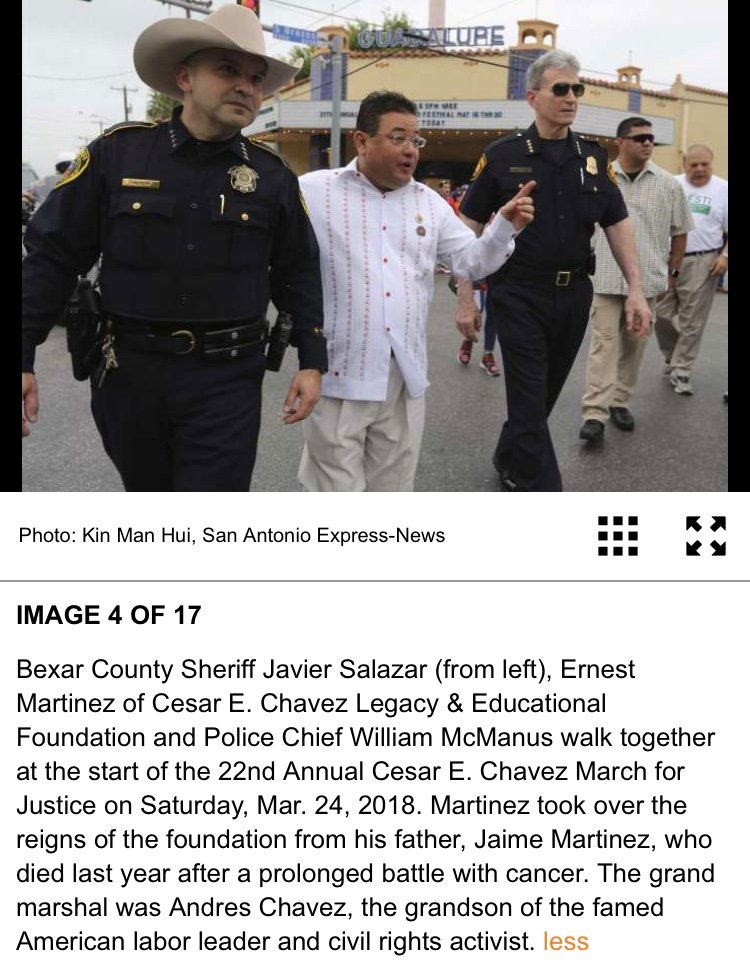 That’s what the banner read, flying high over march attendees at the 50th anniversary of the San Antonio MLK March. This is the message Valero, a fortune 500 company, was allowed to bring. But they were not alone. H-E-B, who sells berries picked by immigrants working in grueling conditions, was also allowed to march. They were then followed by Boeing, who uses slave labor from prisons, to make their machines. It was a silent march. No chants for liberation, no chants against police labor. The mere presence of these corporations seemed to suck the life out of every person there. The only cries for justice came from a small group of protesters facing against the march with chants of “Black Lives Matter.” One thing was clear: this was in fact not a march, but a parade for politicians and corporations to have a photo-op.

A group of ten comrades, determined not to have another parade, wait near the end of the 22nd Annual Cesar E Chavez March for Justice with a 20 foot banner that read “BOYCOTT DRISCOLL.” The small group consisted of comrades from the Autonomous Student Network (ASN), The Autonomous Brown Berets de TejAztlan SATX chapter, and members of the People’s Liberation Front SATX chapter. All of us ready to disrupt the march after they refused to endorse the boycott themselves. That’s right, a Cesar Chavez march, Grand Marshalled by Cesar Chavez’s grandson himself, refused to endorse a single boycott on a company that forces its immigrant workers to labor in grueling conditions.

Why? Because it would hurt their parade’s funding!

Around the corner, an american and texan flag fly high, leading the march. Both of which should be an insult to Chicanxs everywhere. As they approach, the comrades begin to unfold their banners and hold their signs. Unfortunately, it doesn’t take but 5 minutes before we begin to be swarmed by the filth. Their leader is a short man with a shit eating grin and a plastic toy pig head glued on his bike’s handlebars. He asked about what we were doing and the comrades present did what we should all do when the filth attempts to speak to us and ignored him, which got his spandex in a twist. However, we immediately had a swarm of pigs fencing us with their bikes. That’s when we saw one of our compañeros from the Brown Berets being pushed into a van, having been tackled off his bike. He would spend 13 hours as a slave to the state and be charged with inciting a riot. Make no mistake, our disruption was meant to be nothing but a peaceful showing of solidarity to the farm workers in Driscoll’s fields as well as the water protectors in Mexicali, and against the recent activity by I.C.E. in so-called-Texas in which more than 140 were arrested. The police were the only ones wanting to start a riot. 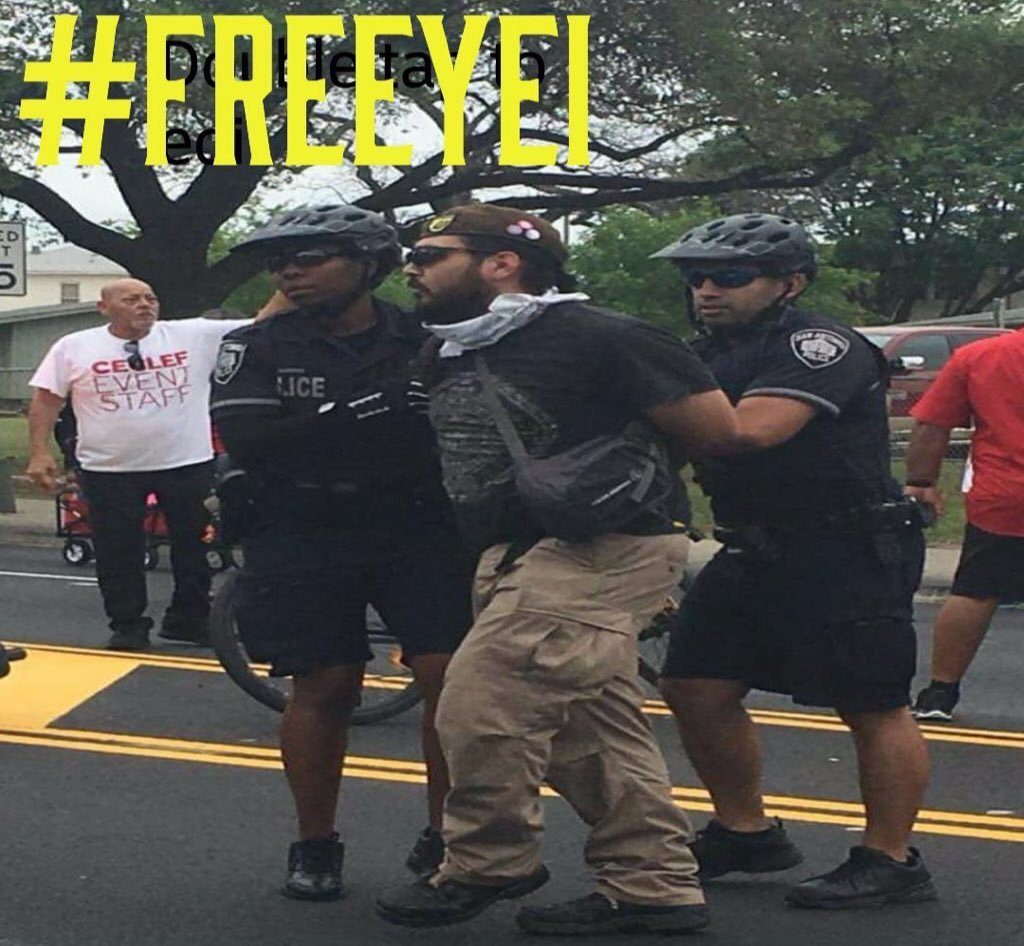 As the march passed us by, we saw an opportunity to move past the police line and into a gap they had left open which would allow us to escape into the march and continue the demonstration. We were meet immediately with pushing and shoving. Then, not satisfied with the amount of violence already, the head pig began snorting orders to “use your bikes!” This ended with comrades having bikes shoved into their bodies and the head pig even swinging his off the ground and into a comrade. We were back to where we started. Any attempt at reaching our bullhorn was shut down with the threat of arrest. We were stuck on the sidewalk, but held our banner as long as we could before they began to roll in the paddywagon. 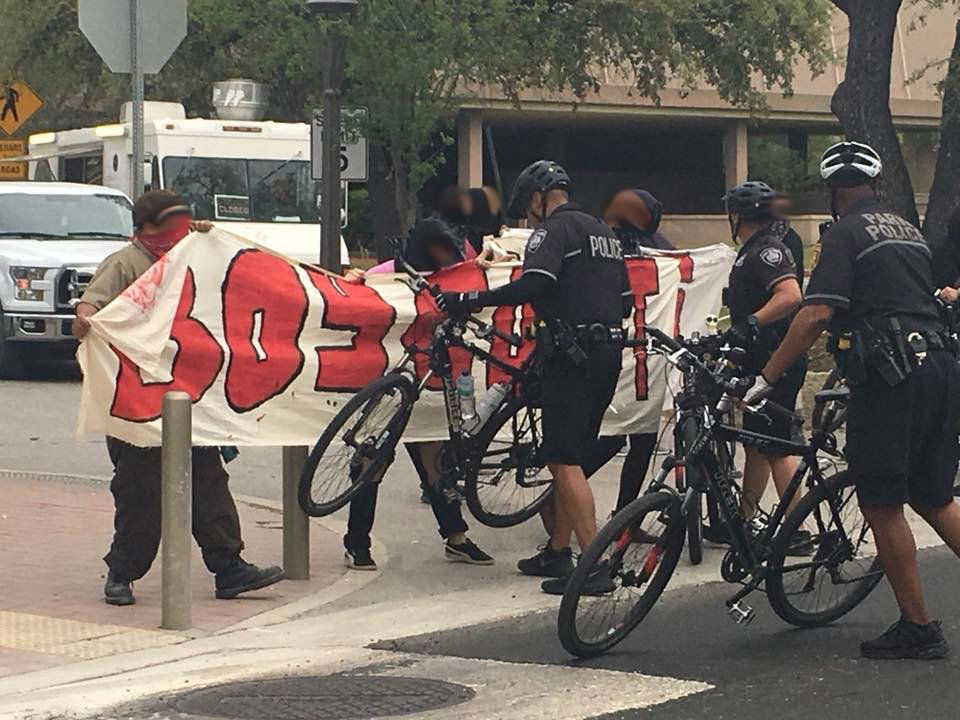 We folded the banner and headed towards the main stage area of the march, where we continued to be followed by pigs. There, we made a second attempt at gathering support but it wasn’t long before we had easily 20-30 pigs surrounding us, both on bikes and on foot, armed with zip ties. With one comrade already arrested and with pigs attempting to seperate us, there was nothing we could do but book it. Luckily, we were able to wipe the filth off our boot pretty easily.

It was only after being beaten by the police that we saw just how much scummier SAPD could get. As we were heading out, we called a comrade who had managed to sneak into the crowd. That’s when we were informed that SAPD and their lapdogs who were invited to do security for the march, the Carnalismo Brown Berets (different from and unconnected to the Autonomous Brown Berets), were informing everyone in the parade that we were white supremacists.

That’s correct. The police were telling people we were white supremacists. Fucking hilarious, because as we know if we were truly white supremacists we’d not only be allowed to demonstrate but we’d have our own police escort. This just goes to show not to ever, ever , trust the police or any organization who works with them. They like to lie to justify their actions. SAPD and their lapdogs the Carnalismo Brown Berets are liars and bootlickers.

After making sure comrades who got assaulted were okay and setting up a fundraiser for our compañero who was arrested, we gathered ourselves together and reflected on the day’s actions, decompressed, and managed to get safely home.

It was disgusting to see so-called Brown Berets snickering with the pigs, planning out how to smear us. However, this just goes to show never to trust a single sound the police or their collaborators (bootlickers) say. They will say whatever is necessary to cause confusion and justify their actions. Today, it applied to a peaceful demonstration in solidarity with workers and immigrants. Tomorrow, it can apply to the next victim of a police shooting. This also goes to show exactly what liberals stand for. The parade was supposed to be a wonderful showing of progressivism and peace, however as soon as anyone tries to make waves in their photo-op and point to struggles that are still going on to this day, we are swarmed by the filth, beaten back, and smeared.

At the very end of the parade, which we must remind you was led by people flying flags which represent violence towards the chicanx people, were two trucks flying the United Farm Workers flag.