On Wednesday evening, the YCT hosted an event where Michael Quinn Sullivan & Cary Cheshire of the right-wing advocacy group Empower Texans came and spoke to them. Following on the heels of the mass protest against the YCT’s pro-Kavanaugh demonstration on West Mall, figures like Paul Bettencourt pressured the University in ramping up their already extravagant efforts to protect the group. In anticipation of possible protests, police swarmed the area around Waggener hall. On the outside, 5-7 cops stood on guard and patrolled the area. Hidden away by the GDC and SAC, two patrol cars waited. On the inside, the lobby of the building contained another 4 police officers. Finally, the room for the YCT’s even contained approximately 5 police officers.

In addition to this massive police presence, two representatives of the Dean of Students office were present. One was Susan Buckenmeyer, mentioned in our most recent article about the YCT’s protest. The other was Sara Josephine Kennedy, Director of Strategic and Executive Communications for the Dean of Students Office. 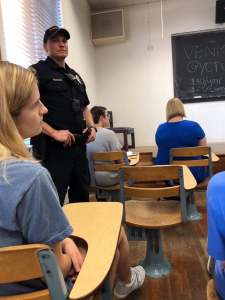 Over the course of the meeting, the group repeatedly mocked the brave student who confronted them and only referred to them as “the woman who ate the sign.” One of their speakers, Cary Cheshire, made an anti-black & misogynist comment when he remarked that he would use the term woman “generously” for her.

When the same speaker went on the make a joke about Brett Kavanaugh and sexual assault, one courageous student who had infiltrated the meeting spoke up and began a disruption. Although she had been confronted before the meeting by Susan from DoS, she stood with a sign that said “Me Too” and called out the meeting for the emotional distress and harm they had inflicted.

As she did so, Sara Kennedy began to read off a statement denouncing disruptions, demanding that she let the speaker finish, and giving warnings. As the student proceeded to sit quietly at the front of the room with the sign, Kennedy indicated that if she did not stop she would be removed from the room and potentially face arrest or disciplinary action from UT. Around 4 cops surrounded her and eventually left the room. After the student was removed, the room responded with laughs.

Two other useful bits of information for this meeting:

First, YCT has two people primarily in charge of finances. The first is Cayden Connally, exposed in our last article. The second is named Ben (last name still undetermined), and is visible on this video

Second, we got the confirmation we needed to show liberals and confirm for ourselves that what we are doing–both in confronting the YCT as happened on Tuesday, and in exposing their members–works. Saurabh admitted that many individuals have avoided joining the YCT for fear of social repercussions, hurt job opportunities, and confrontation. If anything, this should encourage us to redouble our efforts to expose, confront, fire, and smash the YCT. Make it unappealing for anybody to want to join the YCT and organize with them.

Send any intel about the people listed here or the YCT to us on facebook, twitter, or at our email!

Got a story you need to tell? Do you have thoughts on the YCT counter-protest, experiences, art, or something else you want to put out into the world? You can publish it with us! We can promise anonymity for any content you submit and offer up our platform. Send us your opinion pieces, art, rants, zines, reviews, news, statements, report-backs, or anything else you wanna see put out in the world. Don’t worry about being “coherent,” “professional,” “civil,” or some other bullshit–just come as you are!

We take all kinds of content, with an eye towards marginalized perspectives and news about movements & revolutionary organizations. Submit content to austinautonomedia [@] autistici [dot] org.