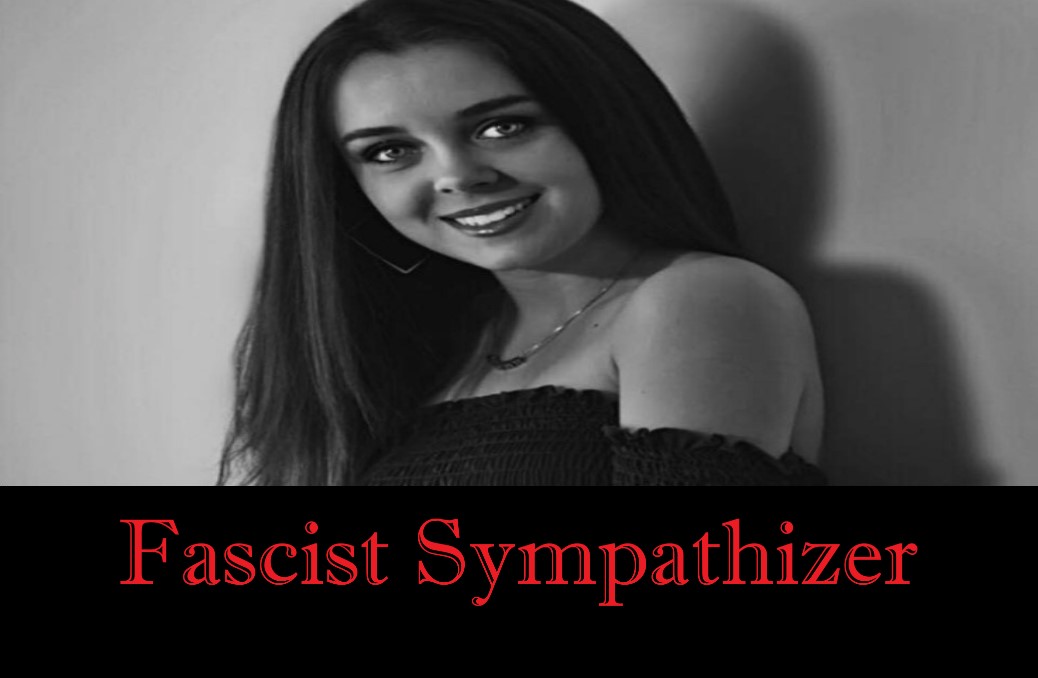 Update 10/25/19: As of Fall 2019, Lillian Bonin has acted as Chairman for the Young Conservatives of Texas. In the year since this article was published, we further uncovered her ties to white nationalists and participation in rape-apologia in pro-Kavanaugh demonstrations.

Over the past few days, we have been investigating the political activities and leanings of Lillian Bonin, a UT Liberal Arts Representative. On Friday, we acquired a screenshot of a comment made by Bonin on an AJ+ video. In this comment, Bonin refers to a white man attempting to unlearn his racism by saying “when the left literally won’t accept you until you fully cuckify yourself.”

We know that for most people, one comment using an alt-right associated word may not be enough to care about this person. For that reason, we decided to do some investigation and found some deeper, concerning connections to alt-right and fascist adjacent circles. Bonin herself may not be part of the fascist milieus in Austin, but it appears she may be part of the alt-right circles and the alt-lite (more traditional appearing conservatives who aim to normalize the ideas of the alt-right). Below is an assortment of images of pages & posts liked or shared by Bonin. We will explain below the significance of each of these. 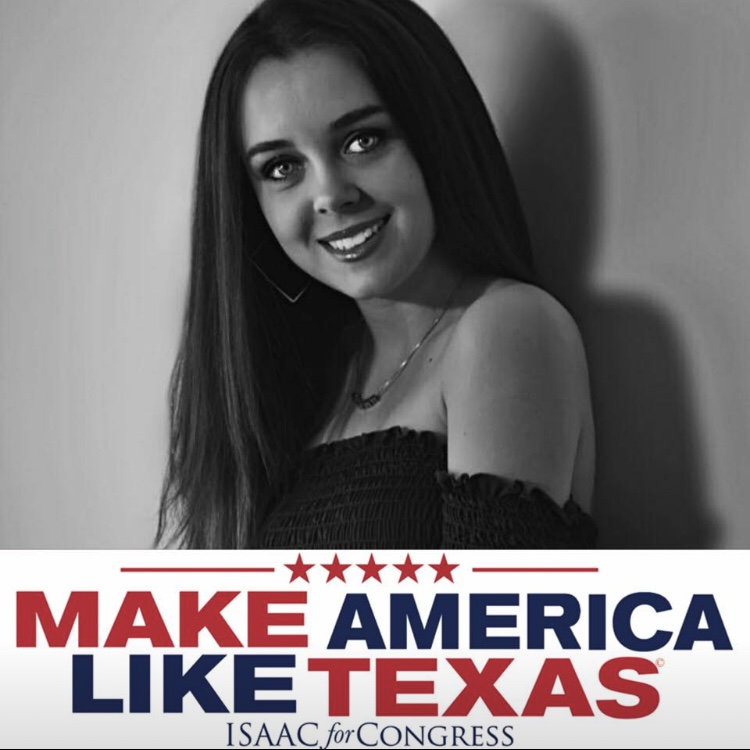 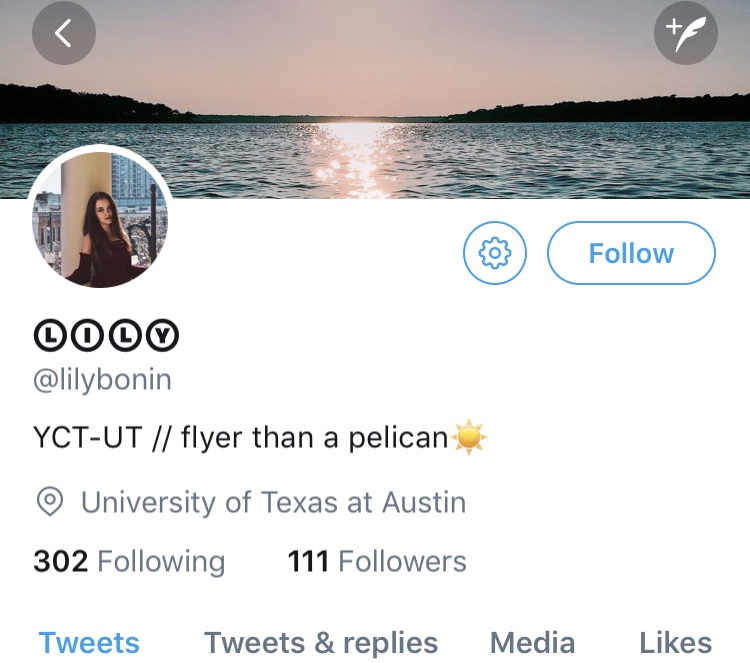 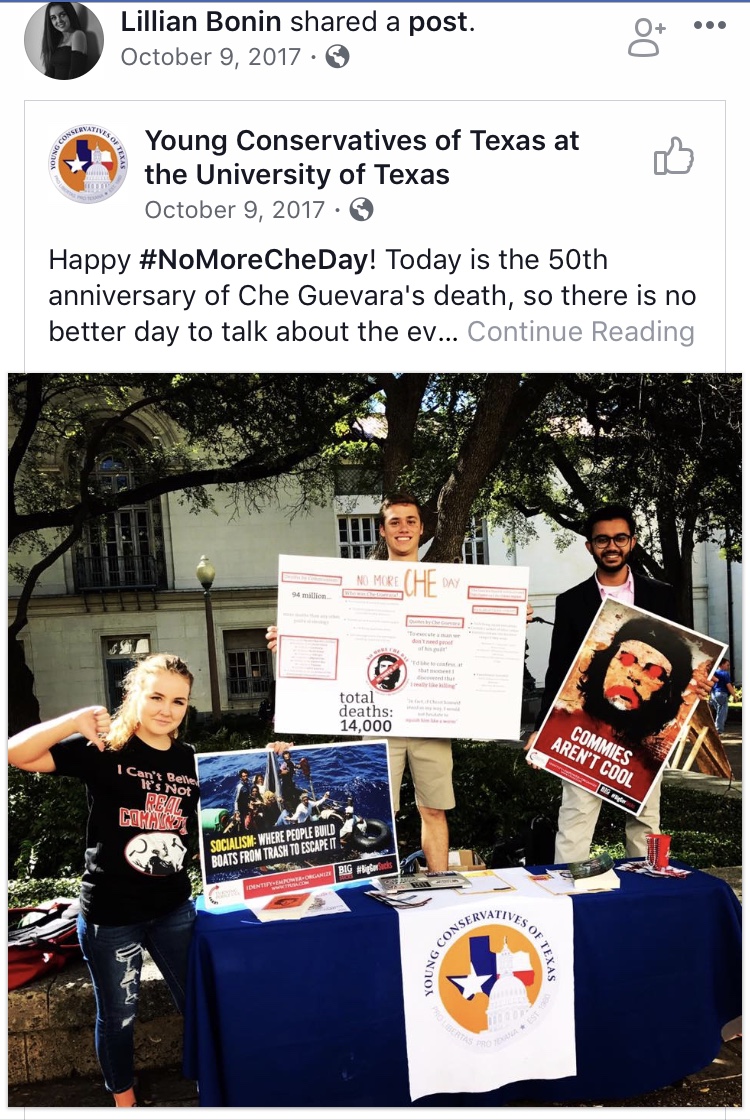 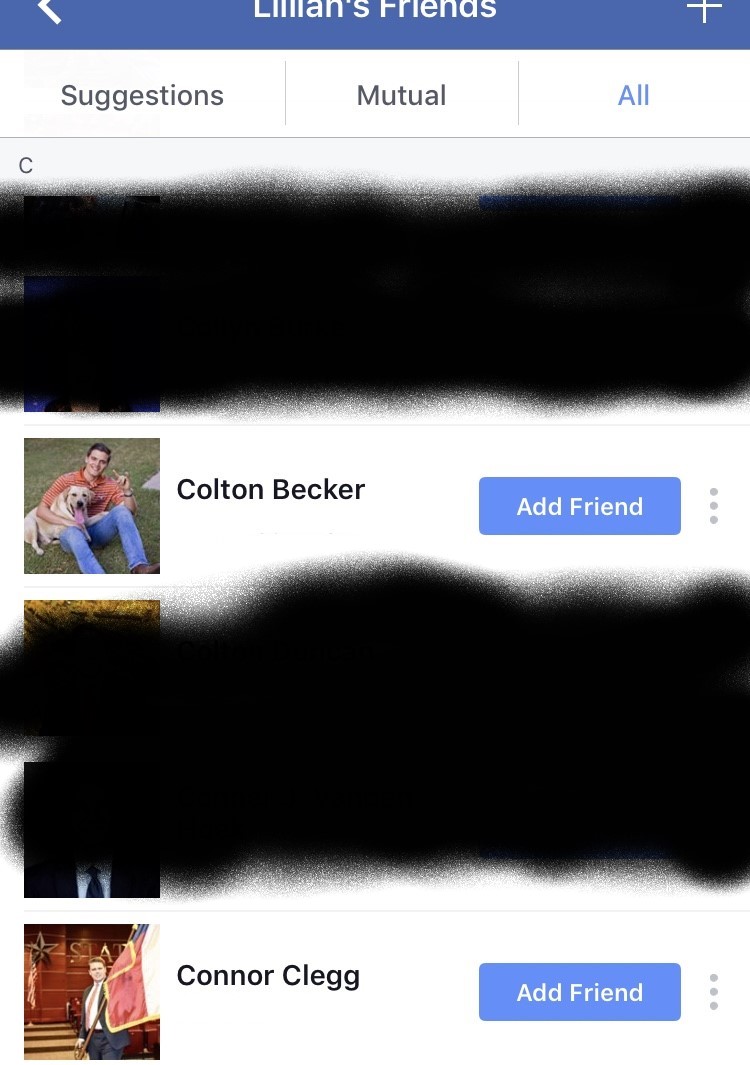 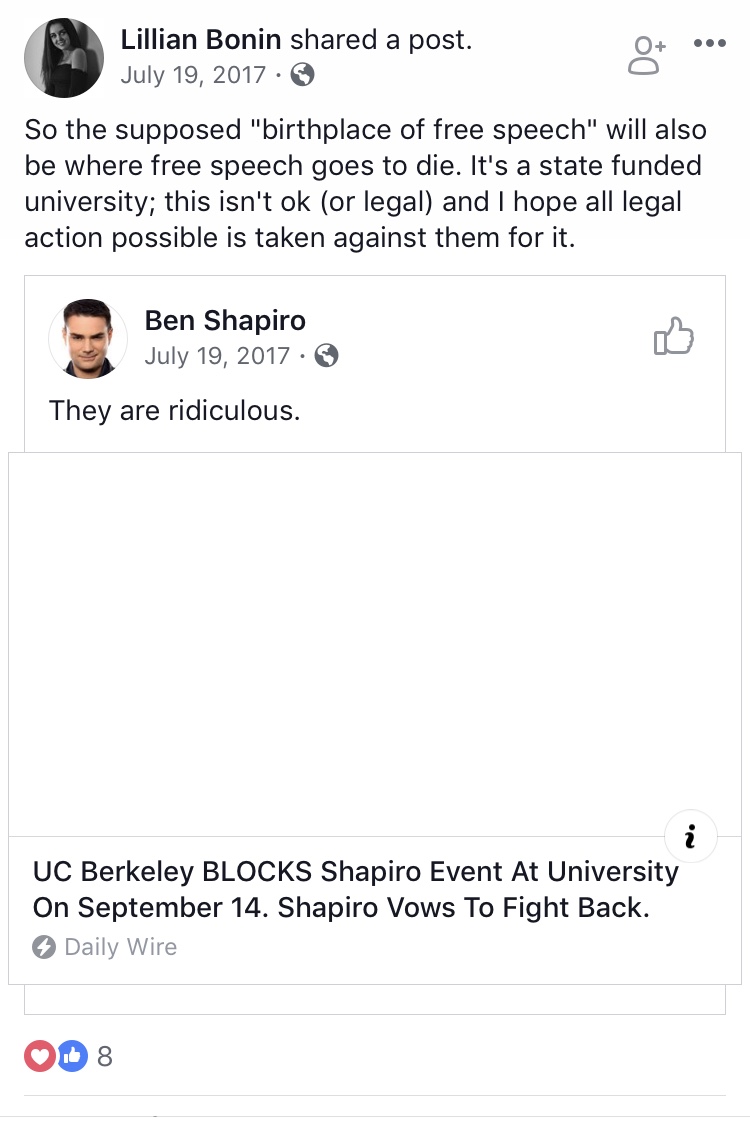 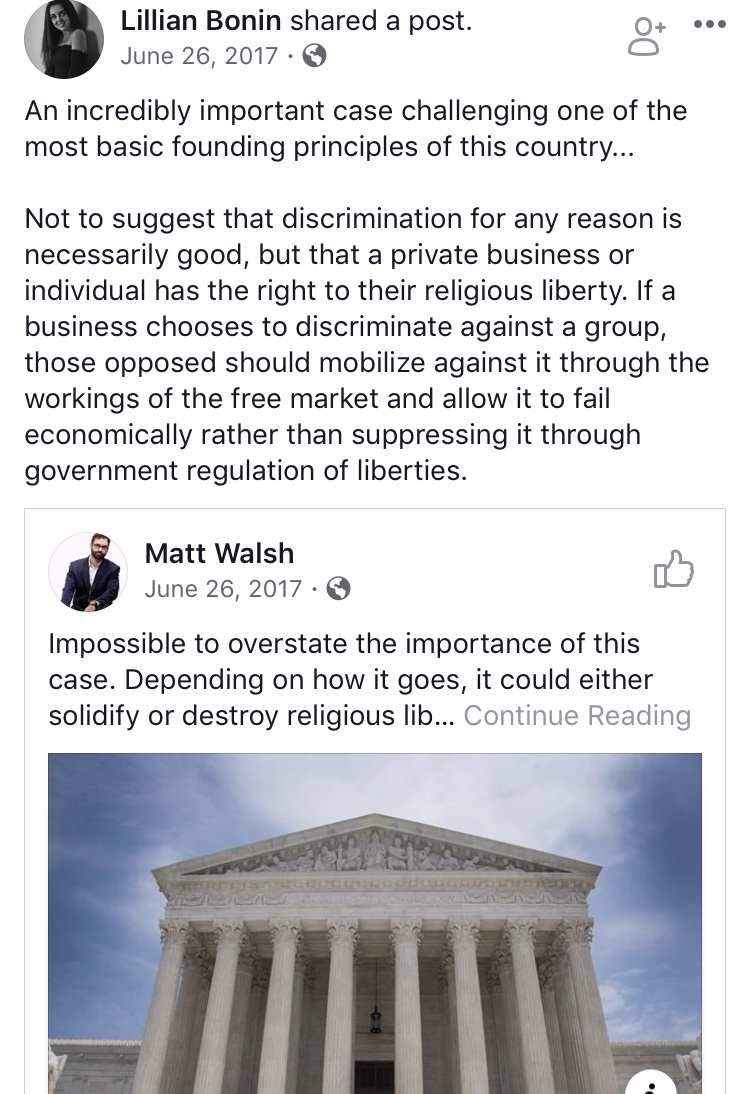 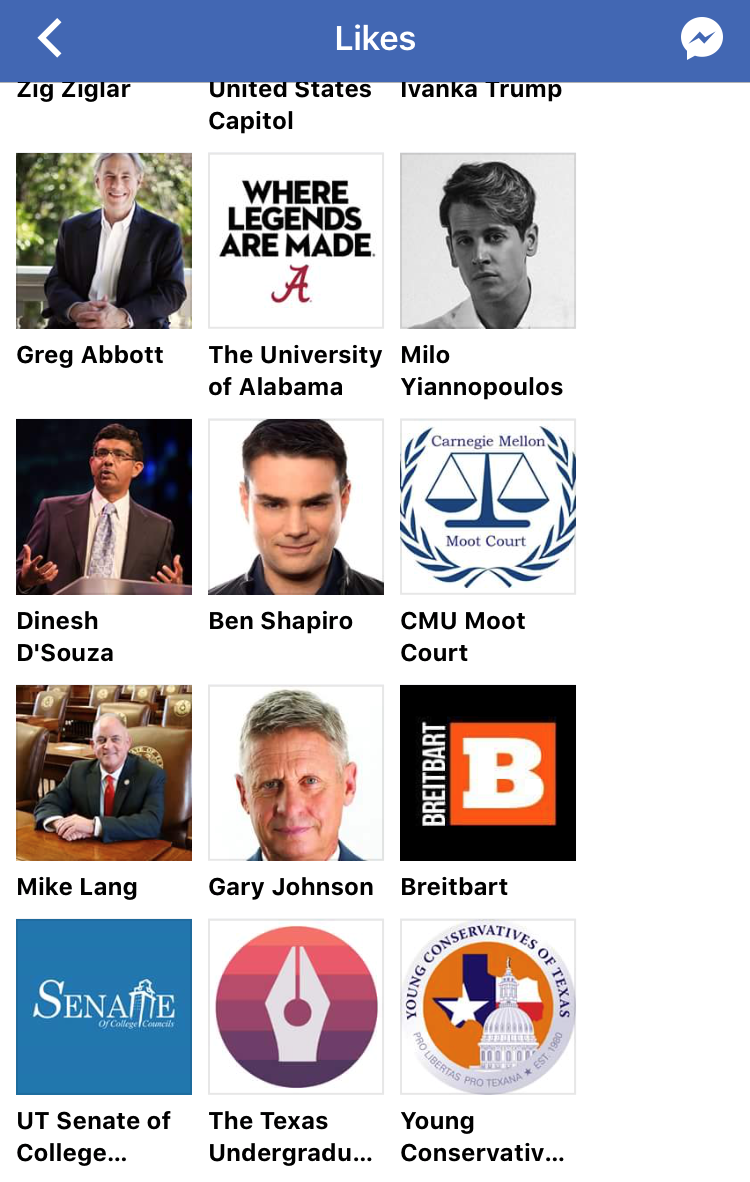 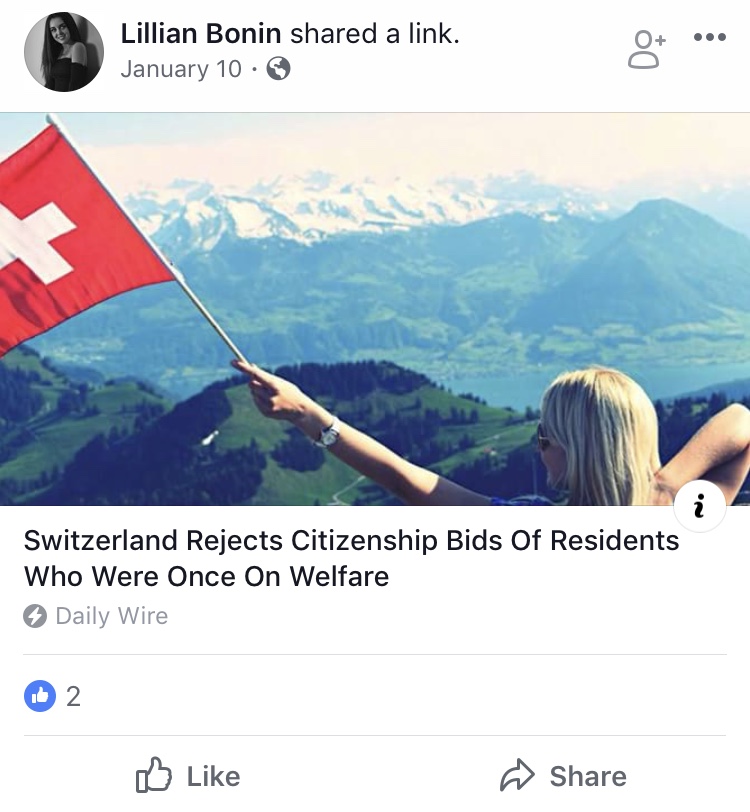 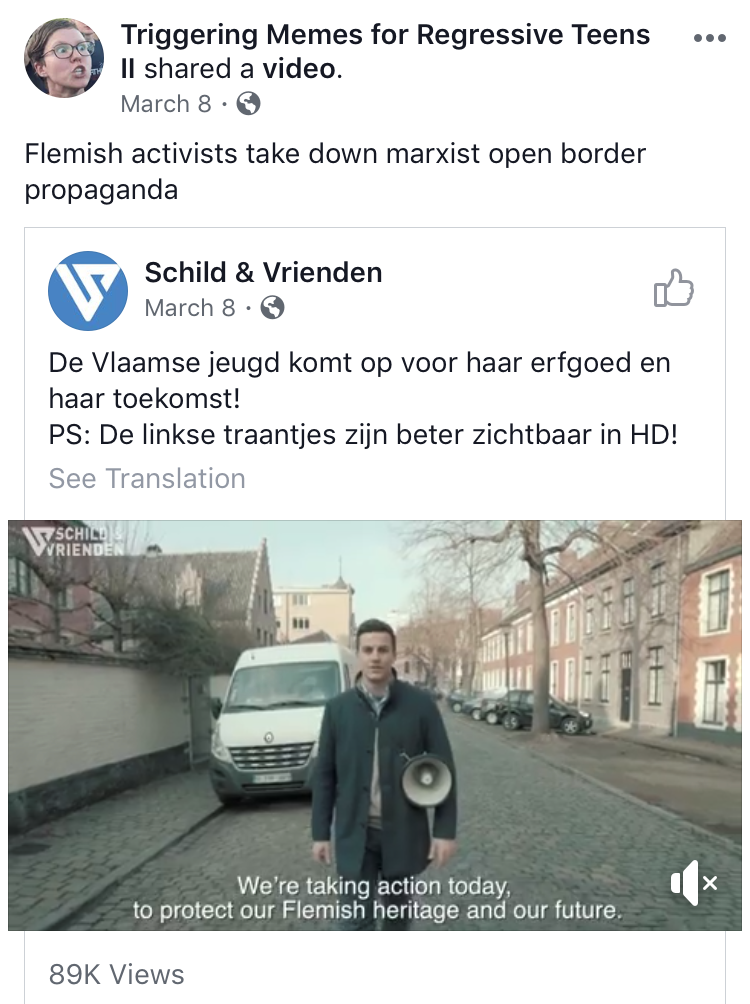 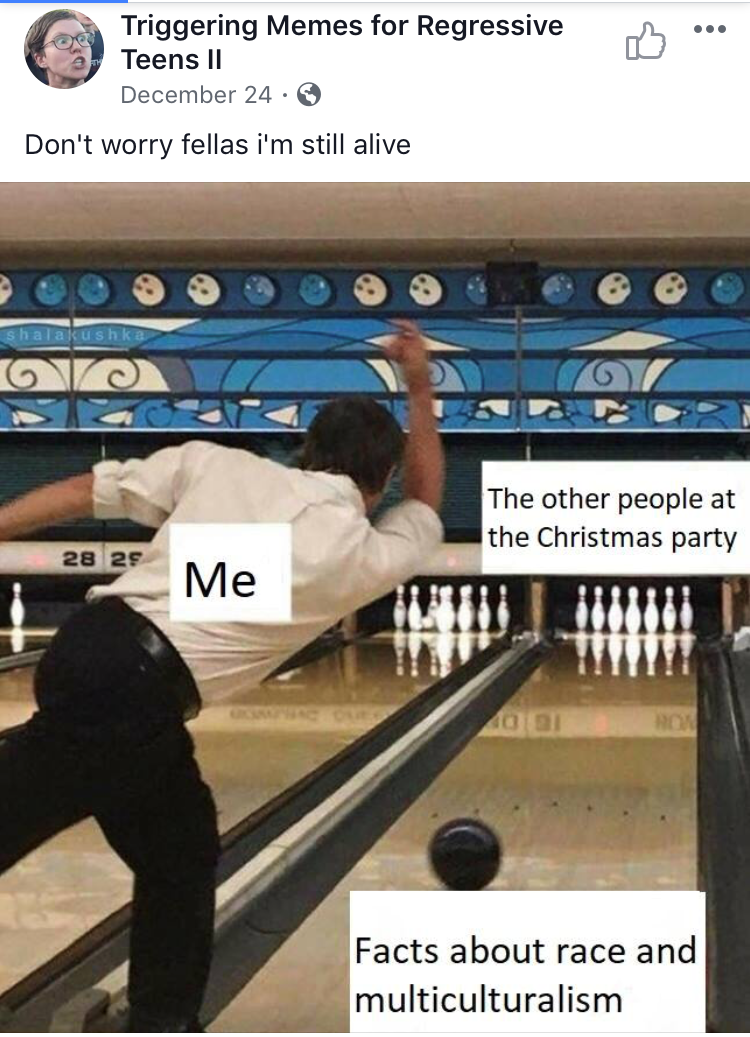 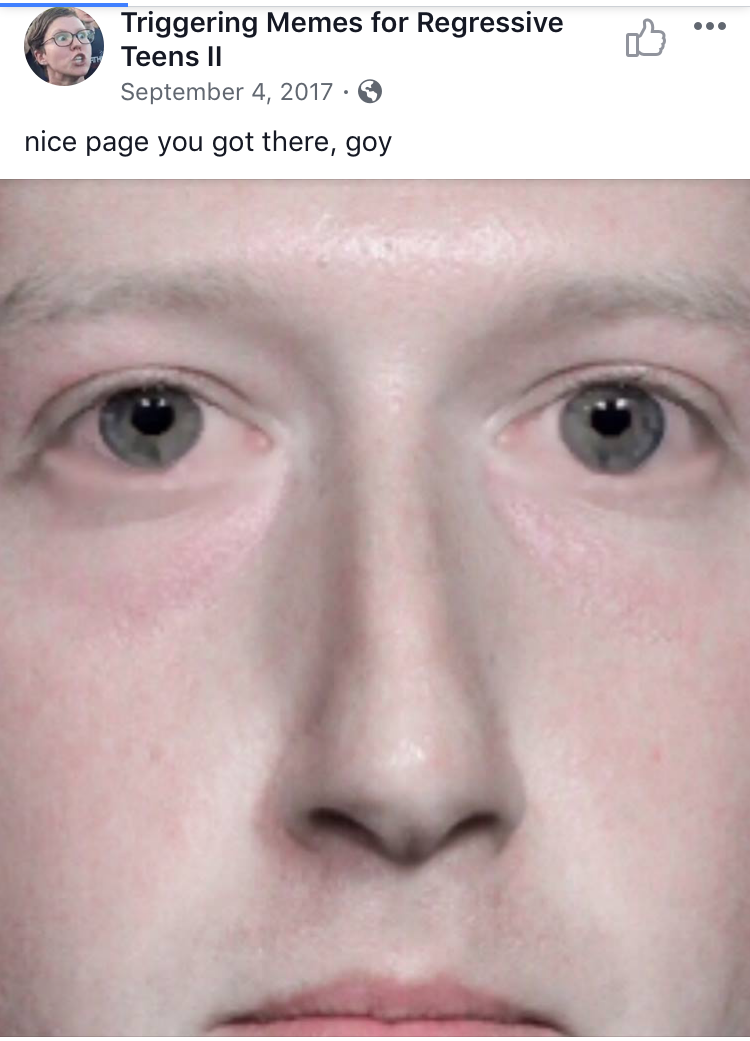 These first few images confirm something that is unsurprising. Lillian is associated with the Young Conservatives of Texas–a student organization that routinely forwards racist, colonialist, and imperialist propaganda and infamous for their “racist bake sale” in 2016. She is facebook friends with both current UT Student Government president Colton Becker and former Texas State Student Government president Connor Clegg–who was impeached over a pattern of racist behavior. Her friends list also includes a man named John Campbell, whose profile photo is an ad for the social media site gab featuring the slogan “Make free speech great again,” and a frog on the logo. Gab is a prominent social media site made by and for the alt-right under the guise of “free speech,” and the frog in the logo references the alt-right use of Pepe memes. This confirms at least one connection between alt-right individuals and Bonin.

Similarly, Bonin has posted content that resembles the talking points of the alt-lite and alt-right. She regurgitates empty talking points about “free speech” to defend reactionary speakers. Notably, the 8th photo shows her defending the right of individuals & businesses to discriminate, saying that discrimination should be left up to the market. This is an old libertarian talking point that does nothing more than secure white supremacy by turning racism into an individual, economic affair rather than a political issue to be defeated.

Digging into Bonin’s Likes reveals more disturbing trends. She is a fan of Milo Yiannopoulos–the alt-right figure who has worn Neo-Nazi symbols like Iron Crosses and spouts transphobic, xenophobic, and white supremacist nonsense. She liked a post from Milo that praised anti-Muslim comments from a Polish politician–a politician who is heavily connected to the resurgence of the anti-semitic, white nationalist right in Poland. She has also liked a post from Matt Walsh which describes transgender people as “severely mentally ill” in defense of the ban on transgender people in the military. In January, Bonin shared an article celebrating the rejection of citizenship bids from those on welfare in Switzerland.

Lillian Bonin is furthermore a fan of alt-right figures such as Alex Jones, Infowars, & Lauren Southern. Not much needs to be said on Alex Jones & Infowars, who regularly peddle conspiracy theories to rile up their base. Infowars caters to a subtly white nationalist point of view, and has close ties to outright white supremacists. Lauren Southern is an alt-right figure who holds white nationalist views on immigration and seeks to “cure” Muslims of the “undesirable” parts of their religion. Most notably, Southern joined a boat of fascist Generation Identity members in Europe as they chartered a ship to attack rescue ships saving refugees in the Mediterranean, thereby actively taking part in white supremacist violence. Read more about Lauren Southern here.

Perhaps the most frightening connection between Lillian Bonin and the fascist right is that Bonin “likes” a page named “Triggering Memes for Regressive Teens II.” This page is more than just a traditional conservative “anti-SJW” meme page. The content of the page shares outright fascist, white nationalist, and alt-right content and talking points. They have shared videos from Flemish fascist group Schild & Vrienden, memes about the boogeyman of “multiculturalism,” and an anti-semitic meme about Mark Zuckerburg. This is only the tip of the iceberg for white nationalist material posted on that page.

It is yet unknown how deep within the overt white supremacist milieu Bonin really is. She may simply be a recent convert, radicalized by content online. She may have been a longtime supporter who has kept up a very effective cover. She may be attempting to push the YCT in a more (explicitly) fascist direction, or she may have been influenced by other fascists within the YCT. We do not have evidence that Bonin is connected to more organized far-right groups or fascist networks around Austin.

Nonetheless, the existing evidence should be sufficient to disqualify Bonin from being Liberal Arts Representative. Someone who believes that trans people are mentally ill, that Muslims are dangerous, that “free speech” should protect racist activity, and follows fascist figureheads & pages cannot adequately represent the needs of marginalized students. When confronted with the numerous threats to students that keep rearing their heads–from outright Neo-Nazis to everyday discrimination–we can expect Bonin to obstruct any collective attempts to deal with these problems because of her political framework. In a video for TX Votes, Bonin lists “protecting the free speech & private property rights of student organizations” as one of her priorities. Given that she references a motion passed after the YCT threw a tantrum about people writing on their sign, one can expect that as a Representative she would go even farther to protect organizations like YCT. Were a student organization to invite a Neo-Nazi like Richard Spencer onto campus, we could expect Bonin to be one of the lead defenders of the fascist right to recruit. Lillian Bonin has to go.

Let’s be clear: this isn’t about Bonin being a conservative. There are likely plenty of conservatives (and liberals) that those of us on the “Left” might consider abhorrent, but we see that as a problem of Student Government itself. Our issue is that Bonin is far too close to particular tendencies of far-right activity that have produced some of the most dangerous manifestations of racist activity. But we also know that Student Government does not really represent anything but a circus for the (mostly white & wealthy) to pad their resumes while putting on a performance of “doing something” that the University can point to in order to deflect student concerns. While Bonin must be sacked, we also have to remember that the new executive alliance was put in office by a wave of racist white reaction to the Guneez & Hannah campaign. The problem is not just within Student Government: the problem is Student Government itself. For marginalized & working class students to have any real power on campus, we need to build our own assemblies, networks, and infrastructure that can exercise autonomous power and direct action against the University to defend our needs & desires.

Got a story you need to tell? Publish it with us! Send us your hot takes, reviews, news, statements, report-backs, or anything else you wanna see put out in the world. We take all kinds of content, with an eye towards marginalized perspectives and news about movements & revolutionary organizations. Submit content to austinautonomedia [@] autistici [dot] org