We’ve just made it through another series of hellish weeks, with SXSW and Roundup hitting us back to back. As we come out on the other side of Roundup, we wanted to highlight some of the moments from this weekend that made even clearer why Greek Life is, at its core, a racist, cisheteropatriarchal institution. We’ve captured some of the student discussions and other events of this weekend, including catcalls, insider secrets, and assaults. Remember that this is only a small sampling of the events and experiences of this weekend, and there are likely many more stories that remain untold due to fear, shame, stigma, or the normalization of the horrors of Roundup & Greek Life.

Note re: the sexual assault described above–the address listed is the Sigma Alpha Mu frat. The perpetrator was not a member of the frat. This, of course, is only one incident where the survivor felt that they could report and turn to the police. This does not reflect the myriad untold stories & experiences of people assaulted or harassed over the past weekend.

In addition to the obnoxious swarm of identically-dressed, bland white people in West Campus, Roundup is sickening for political reasons as well. It has its origins in deeply racist traditions, and in a sick twist of irony it today makes money off of black entertainment. The following images go deeper into this history and reality, providing a lucid student analysis of the reality of Roundup. 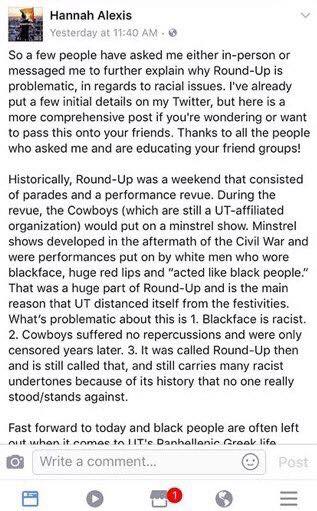 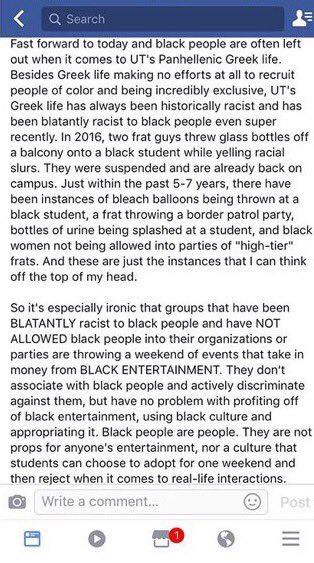 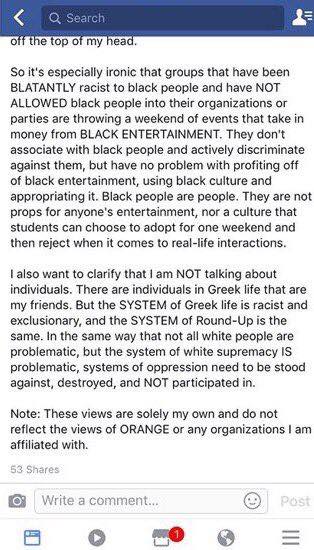 To this, we would only add a few comments ourselves. First, is that there is no real contradiction between Roundup’s exploitation of black entertainment for profit and Greek Life’s exclusion of black people. Rather, it perfectly fits the model of racial capitalism that Greek Life epitomizes. Blackness, black aesthetics, and black labor are valued only in terms of how they can generate profit for white institutions & white Capital. Therefore, black people are treated as valueless (unless they meet an absurdly high threshold for integration into the system) while black cultural productions are used in order to enrich the experiences of non-black (in this case, mostly white) people.

Second, Roundup should be recognized as an attempt to charity-wash Greek Life and build a base for recruitment. The philanthropic nature of Roundup helps presents Greek Life as normal and good, especially to the impressionable high school students who are taught that this is what college life is (and should be) like. This charity should be recognized for the fraud that it is, for a few good deeds from institutions built to train & protect the next generation of (white) capitalists do nothing to challenge the everyday exploitation and oppression that they perpetuate.

Austin also received a visit from a group of folks who probably represent the most uninhibited expression of what Greek Life stands for: The Proud Boys. The Proud Boys are a fascist fraternal organizations built on ideas of “civic nationalism,” “West is Best,” and patriarchal chauvinism. They regularly collaborate with outright Neo-Nazis while attempting to offer a more “diverse” fascist movement. They were spotted downtown, primarily on E. 6th Street, over the weekend. They were kicked out of a few bars once the establishments got an idea of who they were, but they were able to host some sort of awards ceremony at Shiner’s Saloon. It is only fitting that they visited town during Roundup, since Greek Life has its roots in a friendlier, more palatable version of the same ideals of fraternity and nationalism that the Proud Boys operate under. [Subscribe to updates on fascist activity & other shit like this here].

At the end of the day, we’re glad that Roundup is over. But we know that the threat the frats pose to our communities doesn’t end there, because the harassment, racism, and assaults are an everyday reality. We can only hope that some day Roundup will be replaced with a set of dope, militant parties like the ones hosted by some friends up in Minnesota.