Last week, a series of on campus events demonstrated the strength of the Palestinian liberation movement at UT. The Palestine Solidarity Committee at UT hosted their yearly week of Israeli Apartheid Week actions, a chance to raise awareness about the struggles of Palestinians and initiatives like the Boycott, Divestment, & Sanctions (BDS) campaign. This year marks the 70th anniversary of the Nakba, the mass displacement & ethnic cleansing of Palestinians in 1948, and the beginnings of Palestinian resistance to occupation. To make up for the lack of reporting in local and campus news outlets, we have gathered a rundown of the events and their significance here.

Apartheid Week featured a full range of events & organizing efforts that served as a testament to the capacities of the Palestine Solidarity Committee and the movement they have built. The week began with the erection of the “Apartheid Wall,” a series of wooden panels meant to serve as a mock barricade resembling the apartheid wall set up by Israel. Each panel featured hand-made images and information about the occupation, Palestinian life, and resistance. These remained up in West Mall throughout the week, as PSC members tabled to talk to curious passer-by and help answer questions regarding Palestine. The wall was briefly moved to East Mall on Wednesday to correspond with the Block Party Protest.

This year, campus zionists attempted to strike back and “control the narrative.” Students stood near the Apartheid Wall with signs reading “Free Palestine from Hamas,” and “The wall was built to stop terrorism,” in an attempt to legitimize the colonization of Palestine by pointing to the flaws of Hamas (which does not control or represent all Palestinian resistance) and name resistance to occupation “terrorism.” Going even further, campus zionists invited Israeli Defense [read: Occupation] Forces soldiers spread their propaganda about the conflict. The soldiers were spotted throughout the week near PSC’s Apartheid Wall and rally, talking to other students and mocking the suffering of Palestinians. When pressed about why they, as opposed to zionist students, were on campus, the soldiers responded that the students felt unsafe because of the PSC members and the political claims they were forwarding.

This was informative in a couple ways. It exposed the true colors of zionist students revealing that they are so afraid of Palestinian students making political claims that they would send soldiers to confront them. The only difference in this case is that the soldiers did not have the authority to threaten students with violence like they do with Palestinians living under occupation–although multiple people had no doubt that if they could, they would do so. Furthermore, the IDF soldiers forwarded political claims that diverged greatly from that of most campus zionist groups. Whereas most student groups fore-fronted liberal arguments about diversity & democracy, the soldiers expressed neo-conservative narratives about terrorism which were far less sympathetic. This helped expose the dehumanizing way in which actual Israelis taught about Palestinians. The IDF soldiers were finally removed from campus on Thursday, when they were reported to Dean of Students and escorted off campus due to their non-student status. 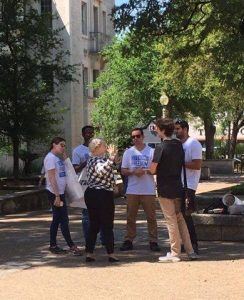 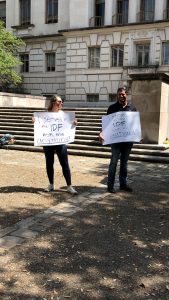 On Tuesday, PSC hosted a screening and discussion of The Occupation of the American Mind, a documentary critically examining the role of political lobbies & Israeli government efforts in influencing public opinion and policy to favor Israel’s interests.

On Wednesday, the Committee held their yearly counter-protest against the Israel Block Party, a yearly fundraiser & celebration that attempts to paint an image of Israel as a place of diversity, democracy, and fun. The purpose of the yearly protest is to provide a counter-narrative that exposes the genocidal foundation on which Israel’s promises are built, as well as disrupt the ability of campus zionist groups to perform outreach. This year, both events were delayed by a few hours by rainy weather. The counter-protest ended up running from 1-5 PM.

From the beginning, UT delivered a heavy-handed response that demonstrated perfectly the parallels between zionist occupation in Palestine and the University’s normalization of Zionism domestically. The protest was made to stand behind barricades set up by UTPD, literally walling off the protestors from the Block Party. At any one point, one could spot anywhere from 15-20 officers stationed around the Block Party & protest. Nearby, an unmarked white van was parked in case the cops needed to kidnap protestors. At one point, officers singled out a protestor and demanded that they remove their keffiyeh from their lower face in order to enforce UT’s “no mask” rule. This prompted some protestors to question how UTPD would enforce the rule on Muslim women wearing face coverings for religious reasons.

As the weather progressed from dreary & wet to warm & sunny, the protestors routinely chanted during passing periods, with shouts of “Viva, Viva, Palestina,” “Intifada, Intifada, Long Live the Intifada,” and more filling East Mall and drowning out the Block Party. Some PSC members handed out literature and engaged passing students to inform them about the protest. Attendees held signs and banners reading “Revolution Until Victory,” “Make Israel Palestine Again,” and “The IDF Is A Terrorist Organization.” Numerous passing students joined the protest upon learning what it was about. Between passing periods, Palestinian students how to Dabke and formed Dabke circles on speedway. Dabke is an Arab dance style, involving line and circle dancing, that is popular in Palestine. The event was a successful opportunity for outreach and growth for the organization, as interested students decided to involve themselves in building the Palestinian solidarity movement on campus. The rally ended with a series of speeches which highlighted various issues such as the similarities between the UTPD response & zionist occupation, the collective & interrelated nature of liberation struggles, collective memory of the Nakba, and hope for the future liberation of Palestine.

As expected, the Block Party attracted all sorts of despicable figures to its defense. The IDF soldiers stood around alongside other organizers, wearing shirts that read “Defending Freedom From Hate.” These shirts, as well as the disingenuous comments by hecklers, aimed to shift the narrative from Israel’s everyday violence against Palestinians to simplified, War on Terror narratives about “democracy” under siege from evil terrorists. As one PSC member read out a speech describing the pain of his family’s displacement and the destruction of their village, the IDF soldiers could be seen snickering and laughing. Also present was Turning Point USA recruiter Benjamin Larrabee. TPUSA is a far-right organization, whose events have regularly attracted crowds ranging from “anti-SJW” conservatives to outright Neo-Nazis. Larrabee filmed the protest while his friend, a UT student, role-played as an Infowars reporter by attempting to “dialogue” with protestors and using his umbrella as a mock microphone. Protestors covered their faces with signs & banners upon learning of their affiliation, and organizers told people to not engage them. Eventually, some students began using signs to block Larrabee’s camera while shouting “Go home racists.” They finally disengaged after UTPD asked them to move back in order to avoid escalation. 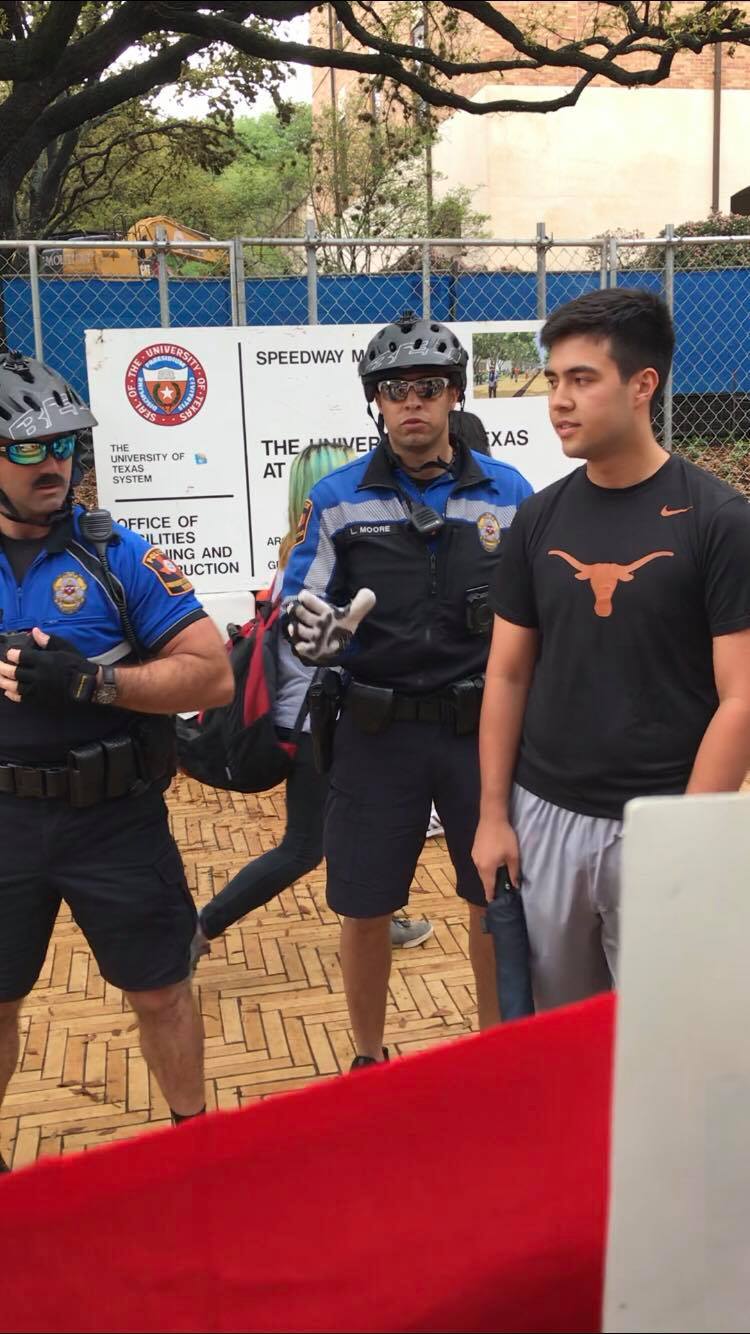 We ask that anybody with information on this student & his networks please contact us [on FB, Twitter, or our WordPress.]  This information will help us determine the extent of the local Turning Point USA network so that we can combat their attempts to found a local chapter, which could draw more dangerous right-wing forces to campus.

On Thursday, PSC hosted a panel discussion about “Interconnected Struggles,” with Mohammad Nabulsi, a UT Law graduate and former PSC member. One of the planned speakers, Rhiannon Hamam, had to drop out at the last minute to deal with issues related to her work. The panel explored the parallels and material connections between the formation of militarized, colonial borders along the Israel-Palestine and US-Mexico borders. In his ending remarks, Mohammad made clear the necessity to organize and for organizers to be humble, so that they may more effectively engage working class & oppressed peoples in all their complexity. Below is a link to the full video of the discussion.

Watch our panel event “From Palestine to the Rio Grande”

The week ended on a celebratory tone with the the Third Annual Cafe Resistance, a night of performances related to liberation struggles that highlighted the talents of various oppressed peoples. Students enjoyed baklava & hummus as they watched the performances, which ran the range of stand-up comedy, poetry, and dance. The night featured performances from the UT Spitshine team and the professional Al Hurriyah Dabke troupe from Houston. At the end, the audience formed one long Dabke line and danced around the room. Emphasizing the role of art as a tool of resistance and a way to build unity, the shared space encouraged people to be engaged in the performances and actively participate in a way that was refreshing, energizing, and creative.

To end this report, we wanted to highlight the complicity of The Daily Texan in aiding Zionism on campus. The one mention of Israeli Apartheid Week made in the Texan last week was the protest of the Block Party. Despite the presence of multiple reporters covering the event, the article published barely covers the events of the protest and features no images of the protest. By centering the Block Party in their narrative, the Texan sidelined PSC’s organizing and re-centered the voices of zionists. The article’s “neutral” tone overwhelmingly represented the perspectives of zionists and portrayed the party as “diverse” and fun while making no mention of the conditions of the occupation, the deeper political claims forwarded by PSC, or any of the events of the protest. Regardless of whether this was intentional or not, or whether the individual author or the editorial board is to blame, the effect of this form of reporting remains the same: it produces a biased, partial image of the situation that favors zionists–whose voices are already backed with massive institutional power–over those fighting for Palestinian liberation.

Want your story told? Send it to us to get your voice published on a platform dedicated to anti-authoritarian, autonomous principles! Submit your content to austinautonomedia [@] autistici [.] org. We’ll publish all kinds of content–reviews, articles, cartoons, videos, music, and more!