Anonymous submission originally posted to It’s Going Down. Listen to the full audio on Youtube. Read one for highlights & analysis.

On September 1st and 2nd, far-Right groups, white nationalists, and Proud Boys, all associated with the The Texas Patriot Network, a front group for the Soldier o Odin, protested outside the 55th annual Islamic Society of North America convention.

Antifascist groups were also on hand to provide community defense. The following report, which includes leaked audio communications (from September 2nd) from the side of the far-Right, shows their failed attempt to ambush counter-protesters. 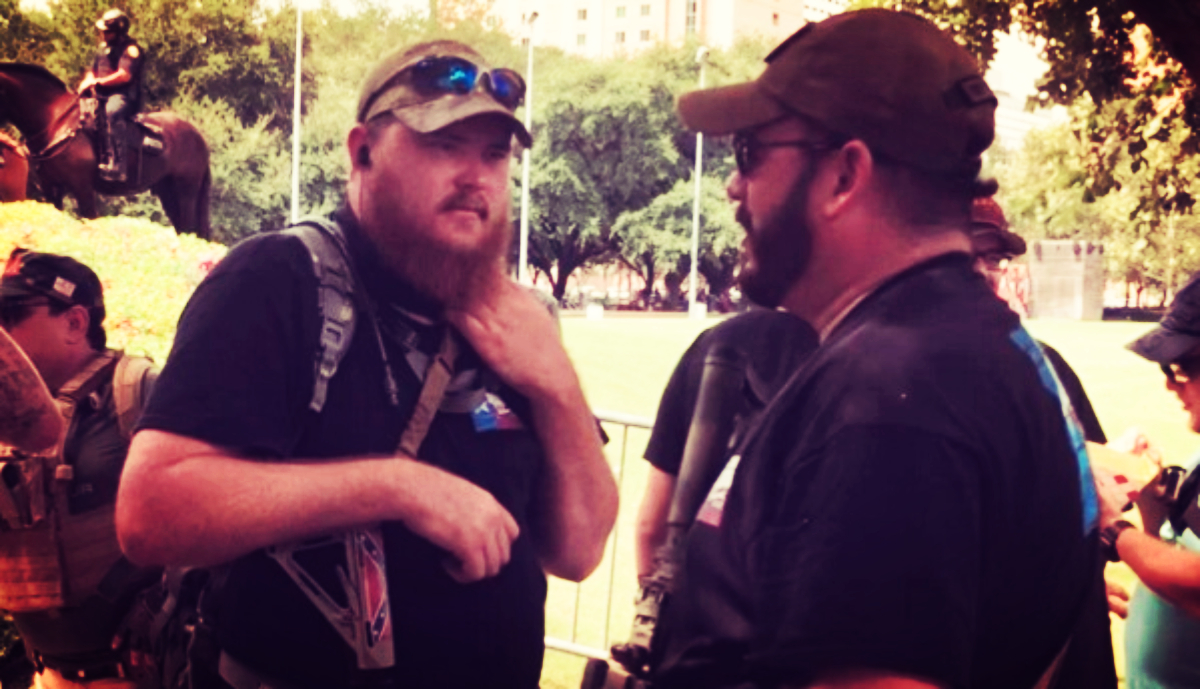 On September 2nd, 2018, Texas far-right militia members plotted to attack antifascists and Muslims outside a convention in Houston.

The plot, and the white supremacists involved, were revealed by leaked push-to-talk audio chats the members used to coordinate. Recordings from the Texas Patriot Network’s (TPN) Zello channel reveal members coordinating plans to physically attack isolated counter-protesters away from the eyes of the police.

“The ones with the polo shirts are over here with these, whatever-the-fuck you want to call them, playing their stupid little goat-fucking music.”

The plot occurred during the second of two back-to-back protests organized by right-wing radio host Doc Greene outside the Islamic Society of North America convention in downtown Houston, Texas. The far-Right demonstrators, which included the TPN and allied groups such as Nomads SAR and the Proud Boys, held their first demonstration on September 1st, with attendees carrying rifles and signs with Islamophobic slogans. However, they were significantly outnumbered by a multi-racial, antifascist coalition.

The far-Right returned on September 2nd for another (and smaller) protest, when they attempted to set their plot into motion as demonstrators were leaving, according to the recordings.

However, Knight and the TPN’s buffoonish plan not only failed, but their actual planning was compromised from the start.

“Aww those motherfuckers are dead meat when they come out of that damn fence, Oh I got position on them now.”

“Aww those motherfuckers are dead meat when they come out of that damn fence,” Planchon (“texasscorpio78”) said at roughly eight minutes, 20 seconds into one recording. One TPN member under the username karl0305 asked: “Why? What happened now?”

“Oh, I got position on them now,” Planchon said. The second TPN member asked, “yeah, you want backup over there or not?”

Planchon hesitated. “No, there’s no way to do it. I’m, uh, way too much incognito. I’m just gonna have to play this out and see if I get lucky. It depends on where the police are gonna be.” Planchon continued: “God, I want this guy in his fucking – this antifa-looking kid. I want him more than Red Dave. But I got three cops right here.”

Another TPN member, Randy Griesenbeck (“olmanreaper1”) of Victoria, TX then reported seeing a group of Muslim men wearing polo shirts. “The ones with the polo shirts are over here with these, whatever-the-fuck you want to call them, playing their stupid little goatfucking music.”

Planchon, meanwhile, reevaluated and discovered another avenue of attack – a gravel path leading behind the counter-protesters. “Man, they are really worried somebody is gonna come down that gravel path.”

Griesenbeck concurred: “That’s exactly what we need to do.”

Two minutes later, Griesenbeck proposed moving toward the the counter-protesters as a distraction – timed moments after Houston police finished removing fences separating the fascists and antifascists. During the maneuver, Planchon and anyone else with him would attack the antifascists from behind. “As soon as they take these gates down we’re going right down that way; y’all flank ’em from behind,” Grisenbeck said.

Attempts by fascists to assault antifascists after demonstrations – when individuals can be isolated and jumped – is a common tactic witnessed in other cities, such as in Denver on September 15th, 2018 when members of the Proud Boys coordinated on video with a Colorado State Patrol officer to assault antifascists.

However, in Houston, the Texas Patriot Network feared the police would catch them in the act. Larry Peters (“larryp316”), a TPN member from Lake Jackson, Texas warned the group: “Hey y’all be careful going that way now,” Peters said. One Houston police officer in particular, who the group just referred to as a “dyke,” was a particular concern.

“Ben, if that dyke sees you she’s gonna come get you,” Tobey Williams (“redbeard92”), a Soldiers of Odin and TPN member, warned over the Zello chat. 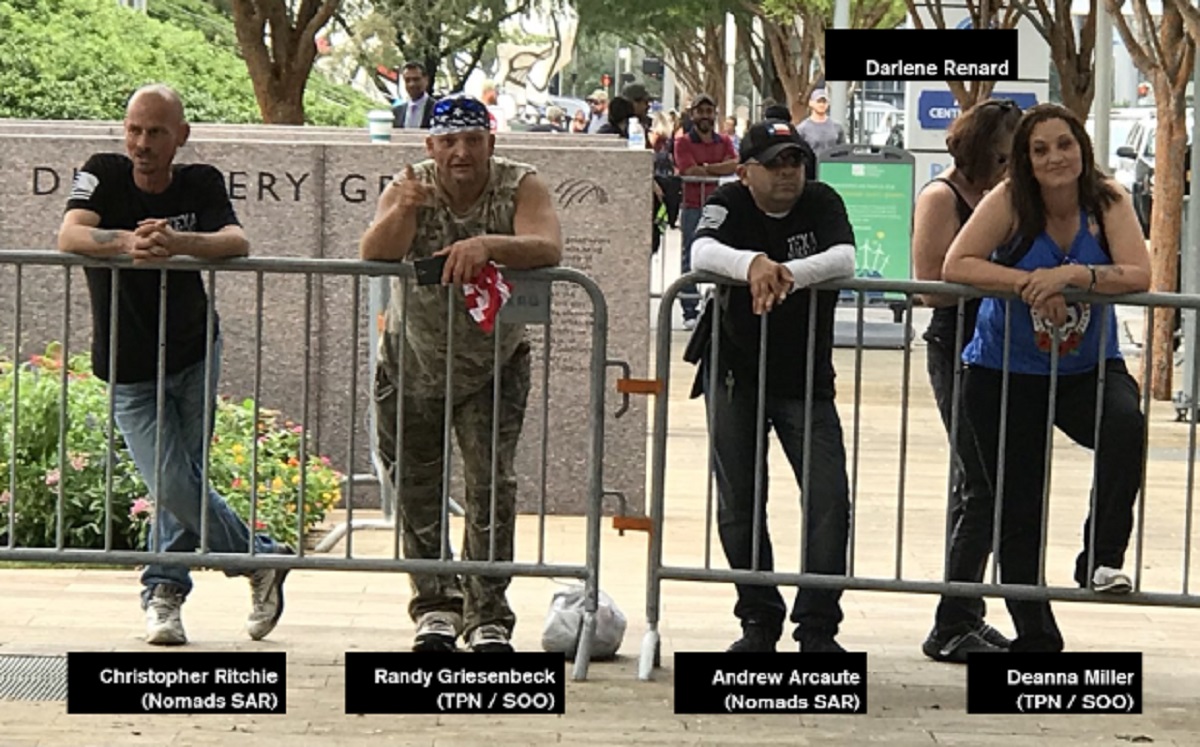 Photo: Participants of an Islamophobic protest in Houston on September 2nd, 2018.

The Texas Patriot Network is one of the most active far-Right groupings in Texas and outwardly presents itself as a militia and III% organization. However, the group’s membership overlaps heavily with the Soldiers of Odin (SOO), a racist vigilante group which began in Finland as an offshoot of the Nordic Resistance Movement, a neo-Nazi organization.

It would not be a leap to describe the TPN as effectively serving as the Soldiers of Odin’s Texas branch given the players involved. Deanna Miller (who has also gone by the names “Deanna Johnson” and “Deanna Aguilar”), a TPN member spotted at the Houston demonstration, communicated over the TPN’s Zello channel as “DeannaS.O.O.” – a nod to the Soldiers of Odin. Her husband, Donny Miller of Lake Charles, Louisiana, also reps Soldiers of Odin on his social media, as does Deanna Miller’s son-in-law, Kentis Tindall, Jr. and his father, Kentis Tindall, Sr., another member of the Texas Patriot Network.

It is the same story for TPN’s Randy Griesenbeck, who makes his connection to S.O.O. explicit.

Photo: At left, Randy Griesenbeck (center) with militia members on September 1st, 2018 in Houston, Texas. At right, Griesenbeck in Soldiers of Odin colors from his social media.

Deanna Miller, for her part, has also made references to neo-Nazi codes such as “14/88;” the 14 being a slogan coined by white supremacist David Lane and 88 for “Heil Hitler.”

Photo: At left, Deanna Miller in Houston on September 1st, 2018, with an unidentified member of the Soldiers of Odin. At right, a social media image of Miller with a neo-Nazi 14/88 code emblazoned over a valknut symbol.

Another associate at the Houston protest, Andrew Arcaute (a.k.a “Aidan De La Rosa”) of Nomads SAR, is a self-described “national socialist,” according to a livestream recorded by Texas open-carry activist C.J. Grisham during the “March Against Left-Wing Violence” on August 18th at the state Capitol building in Austin. That rally was organized by the far-Right pro-Trump group Texans United for America (TUFA).

On August 18th, as Grisham was leaving the Capitol grounds through the southwestern gate, he walked past Arcaute, who warned Grisham not to walk to the left – to the east, due to the presence of an antifascist contingent blocking the path. 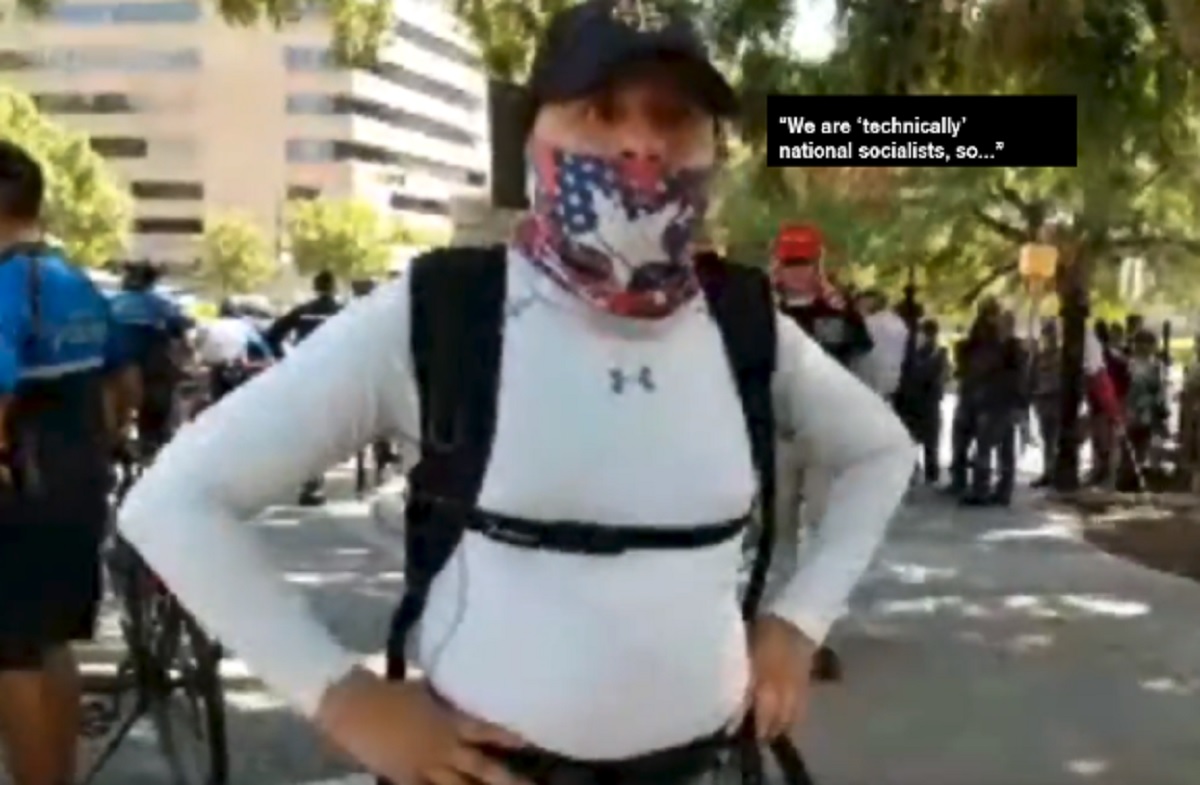 Photo: Andrew Arcaute of Nomads SAR at the Austin ‘March Against Left-Wing Violence’ on August 18th, 2018.

“We are technically national socialists, so,” Arcaute replied.

Also helping keep point at the southwestern gate were members of Patriot Front, the state’s most active neo-Nazi organization. Two Patriot Front members identified at the gate were Marcel Stein and Joffre J. “Trey” Cross III, a one-time bodyguard for Richard Spencer and a former paratrooper with the 82nd Airborne Division arrested in 2007 for attempting to sell drugs and stolen military equipment to a federal agent. 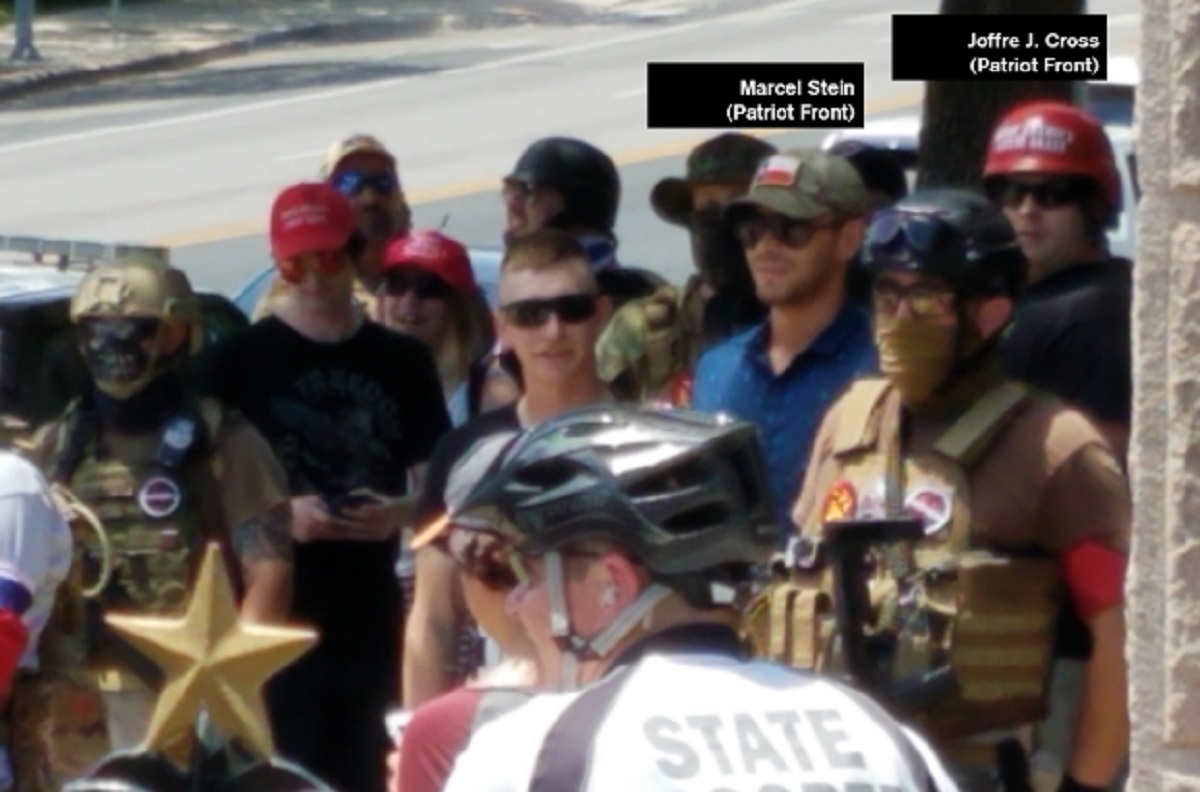 Jen Loh (full name Jennilyn Lohmer Salinas) of Texans United For America was also at the Houston protest on September 1st and promoted it online. Another TUFA activist, Neil Lowrey of McKinney, Texas, wore a t-shirt to Houston with the words “Muhammad Is a Homo.” In Austin on August 18th, his shirt read “Pinochet Did Nothing Wrong,” a reference to the Chilean fascist ruler and a shirt printed by the neo-Nazi clothing company, “Right Wing Death Squads.”

“not only has the Texas Patriot Network tolerated white supremacists, they have also tolerated child molesters.”

These groups do not all get along, at least all the time. Days before the rally in Austin, Patriot Front feuded with Nomads SAR on the event’s Facebook page, and Cross – using the pseudonym “Nathan Goldstein” – verbally insulted the Nomads’ Christopher Ritchie (who himself attended the neo-Nazi ‘Unite the Right’ rally in Charlottesville in 2017) for “cucking;” i.e. denouncing neo-Nazis publicly.

According to sources within the Texas far-Right scene, Deanna Miller and Kentis Tendall, Sr., have also been expelled from Nomads SAR, although the reasons for that are unclear. On the other hand, Arcaute’s professed national socialism has not posed problems for him from the Nomads, and he was standing alongside Ritchie in Houston while wearing the Nomads’ t-shirt. 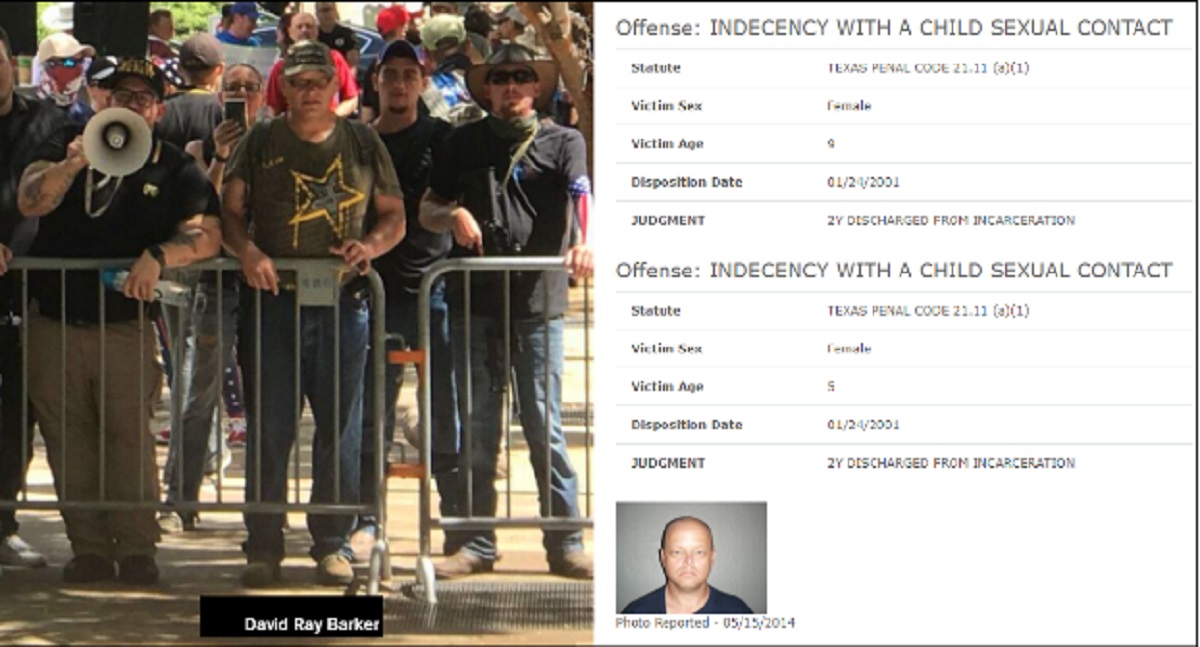 Meanwhile, not only has the Texas Patriot Network tolerated white supremacists, they have also tolerated child molesters. Standing with the group in Houston was David Ray Barker, a registered sex offender from Houston charged in 2001 for victimizing two girls, aged five and nine.

Comrades and friends in Texas should know their foe. At future demonstrations involving the TPN, it is highly likely its members will attempt to attack counter-protesters if they find an opportunity to do so. Overpowering fascists with numbers, gathering and exposing accurate information, and consistently acting in solidarity for the oppressed and marginalized will foil their plans every time.