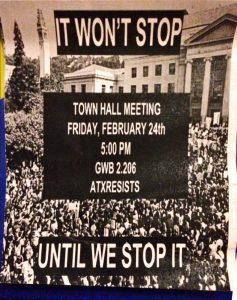 On Monday, February 13th, 2017, students and workers at the University of Texas at Austin awoke to find fascist propaganda and graffiti across West Campus and Campus. Flyers calling for the destruction of Muslims, the outing of undocumented immigrants, and the reclamation of “white pride,” associated with the group American Vanguard—a white nationalist organization—were plastered on poles, newspaper boxes, and statues across campus. Graffiti of the N-word, celtic crosses, and swastikas were spotted in West Campus. Students from the night prior reported seeing a small group of people putting up the flyers. This was not the first time such flyers had gone up; neo-Nazi Identity Evropa stickers had been spotted on a few occasions in the fall semester and were destroyed by anti-fascists. This was, however, the most visible round of fascist flyering on campus.
And this time, due to the mass outrage among the student body, the University was forced to respond. In the response the University made clear that it cares more about catering to the interests that fund and support it (including white supremacists and Trump supporters) than it does about protecting students. In its statement, the University stated that it had removed the posters simply because they violated rules regarding the posting of flyers. The University’s insistence that it “vigorously supports free speech” sent a chilling message: had this been a registered student organization putting up flyers in more “legitimate” places, the University would defend the platform for these fascists to spread their messages against students. The statement from J.B. Bird, Director of Media Relations for the University, furthermore fails to name the fascistic nature of these flyers, only labelling them as “political messages aimed at immigrants, minorities and Muslims,” normalizing the genocidal politics of fascism as a valid political position. Fenves’ letter called for “robust discussions and debate,” as though students of color, Muslims, and immigrants should be forced to debate for their own humanity against those who wish to destroy them. The University has made clear that it believes genocide could or should be simply another option on a ballot to have “enlightened debate” over.

The University’s response does not surprise us. We know that an institution funded by its ties to companies that continue the occupation of Palestine, the targeted destruction of black and brown communities in the prison-industrial complex, and the global war machine of U.S. imperialism can never take a hardline stance against white supremacy, for it is sustained by it—in fact, this institution has invested more of its time in prosecuting people who allegedly covered up white supremacist stains on University walls. This University in its foundation is drenched in the violence of white supremacy, through the settlement of indigenous lands that made the founding of Austin possible and the displacement of Black and Latinx communities to make space for the campus itself. All the University can offer us is meaningless statements and commitments to “diversity.”

From the response of UT’s Student Government we can see the futility of hoping for changes and protections from the University. They have moved to fast track a bill that forbids the posting of any flyers, speech, or material that discriminates against people on on a number of issues—including that person’s political affiliations. The “neutral” language of this bill dangerously equates the organizing of defense against the supporters of genocidal fascism to the calls for genocide against oppressed communities. This is no accident—The Daily Texan recently described posters outing a fascist on campus as “targeting an individual’s presumed political affiliations.”

The University and Student Government can never address the white supremacist climate on campus, because they can never take actions which address the problem as one of racial hierarchy. Acting through the neutral medium of law or policy requires them to form false equivalencies between oppressor and oppressed, between violent attacks and resistance. From this comes incidents as egregious and violent as Student Government defending the free speech of the KKK on campus—including Micky Wolf, who is currently running for student body Vice President. When marginalized students do join these institutions to affect positive change, they instead find their energies drained, their efforts dismantled, and their very presence used to prove the “diversity” of student government.

Instead of pouring our energies into these institutions, we must find outlets to build real student power and resistance—particularly in an age of rising fascism that threatens students in their everyday lives. In the days immediately following the election of Donald Trump and the powerful student marches—led and coordinated by various radical students and organizations—the ATXResists coalition formed as a joint effort among student organizations to meet this challenge. We are a collection of various student organizations with different organizing principles, tactics, and focuses joining forces in a unified front to build student power and combat the interlocking systems of domination that threaten us and marginalized communities around the world.

In the wake of recent events, we are coming together to organize a mass student campaign against the rising tide of fascism and white supremacy on campus and throughout Austin. We hope to see a mass mobilization of students that can build alternative institutions and break with the generalized sense of apathy that pervades so much of campus life. To kick off this campaign, we are calling for a student town hall at 5 PM on Friday, February 24th. We will be meeting in the Gordon White Building, Room 2.206 to discuss the recent events, how best to respond to them, and listen to student voices in order to begin building power. This will be nothing like the town hall President Fenves has called for—one which has been scheduled at a time inaccessible to most students! We are not calling for a dialogue with our oppressors or some discussion group that ends with us leaving with the same feeling of powerlessness we entered with. This town hall will be explicitly for the construction of a long term mobilization against white supremacy. Join us as we attempt to not only defend our communities from the threat of fascist attacks, but lay the foundation for a new type of world.