On June 8th, as 2000+ people converge at the Treaty People Gathering in Northern Minnesota to escalate the resistance against the Line 3 pipeline, a group of activists in Austin, TX demonstrated our solidarity with water protectors up north. Early in the morning, we dropped a banner reading “Stop Line 3: Honor the Treaties” from a bridge above a busy stretch of Interstate 35. We raised another banner declaring, “All Pipelines Have A Body Count – Blood On Your Hands: Defund Line 3” at a downtown office of JP Morgan Chase, a primary funder of the pipeline.

We recognize the long struggle against Enbridge’s Line 3 pipeline as one of the most significant climate justice fights of this time. The proposed tar sands pipeline, if completed, would carry 760,000 barrels of heavy crude oil a day from Alberta, Canada to Superior, Wisconsin – an assault on the climate equivalent to 50 new coal plants. This disastrous megaproject threatens to desecrate Anishinaabe territory; poison hundreds of precious waterbodies, wetlands, wild rice tributaries, and interspecies communities; and further intensify global climate chaos. Building on a centuries-long project of settler colonialism, Enbridge and other world-destroying entities are waging a war on tribal nations and frontline communities, on the land and climate, and on the possibility of a livable future. But a growing Indigenous-led movement of water protectors and land defenders continues to rise up and fight back in defense of the sacred. 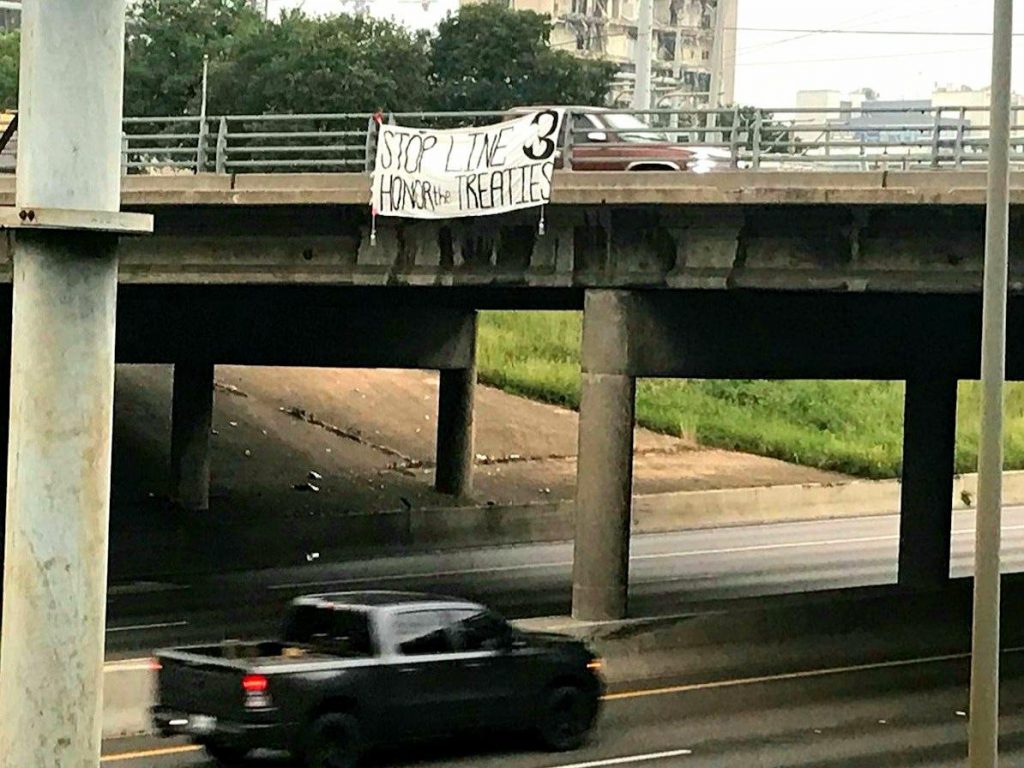 Here on Esto’k Gna lands in so-called Texas, we are positioned within an epicenter of extractive infrastructure, white supremacy, border imperialism, and fossil capital. To the West, the Permian Basin has become the world’s largest producing oil field, with a fracking boom that is wreaking increasing havoc on the climate. To the South, massive oil & gas pipelines run alongside the border wall, jointly destroying land, water, cultures, and communities. To the East, mega-refineries and oil & gas export terminals poison coastal communities and ecosystems. Across Texas, corporate powers engineer policies and practices that perpetuate land theft, genocide, environmental destruction, racism, and misogyny across Turtle Island and around the world. We see all of this violence as intimately connected to Line 3, and we see Texas’ movements for environmental & climate justice, migrant justice, and Indigenous sovereignty as intimately connected to the movement resisting Line 3.

It is imperative that we engage in active solidarity with those on the frontlines of this fight, a crucial battleground for defending land and life against the forces of profit and death. We hope that those of us in proximity to the Permian Basin, the Gulf Coast, and elsewhere in Texas can take emboldened direct action along with the water protectors fighting Line 3, support and learn from this struggle, and build grassroots movement against Line 3, against all extractive economies, and against settler colonial violence on Turtle Island and everywhere.

If you’re not doing so already, follow and support Indigenous-led organizing against Line 3 at the Giniw Collective, Gitchigumi Scouts, Honor the Earth, RISE Coalition, and Indigenous Environmental Network. Learn more at www.stopline3.org/#intro and https://treatypeoplegathering.com. If you live in so-called Texas and want to contribute to the Line 3 resistance, we invite you to sign up here to coordinate solidarity efforts locally: bit.ly/TXAgainstLine3.