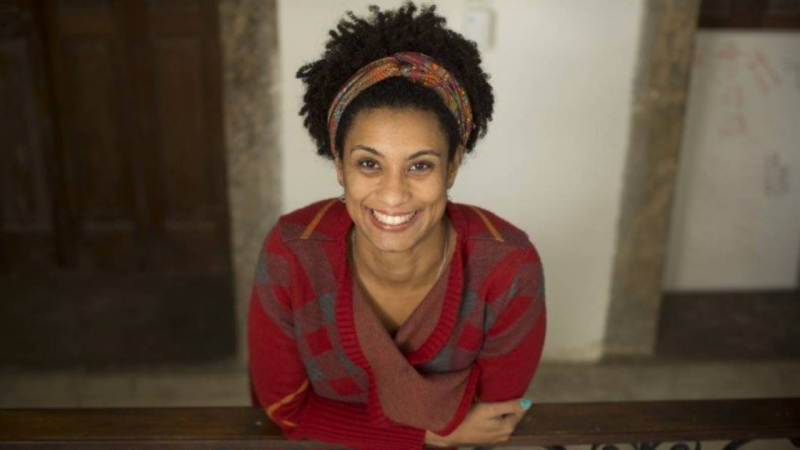 On Tuesday, March 20th, the Teresa Lozano Long Institute of Latin American Studies hosted a Foro Urgente–a regular series of panels & discussions on important recent events in Latin America–to discuss the assassination of Marielle Franco. Marielle Franco was a councilwoman in Rio de Janeiro, Brazil who was a black woman from the favelas, a lesbian, and a socialist. Marielle frequently spoke out against the police genocide against black people and the military occupation of the city. She was shot to death in what many are calling a police assassination, as the bullets were the same kind used by the federal police.

The foro served as a space for reflection as healing, as outlined in the introduction by Dr. Christen Smith. The audience heard from Dr. James Green, Executive Director of the Brazilian Studies Association, and two PhD. students–Daniela Fernanda Gomes da Silvia and Carla Ramos–who themselves are Afro-Brazilian women with ties to this struggle and Marielle herself. The discussion included a powerful provocation from Daniela to act instead of simply talking.

We are publishing this article to highlight the important content of this conversation. The death of Marielle Franco is a tragedy for any interested in combating anti-black genocide and recognizing the transnational links between police violence in the US and abroad. Furthermore, we feel that much of the commentary–particularly Daniela’s criticism of the Left in Brazil, which frequently uses black people’s support to gain power while leaving the anti-black social structure intact–are important for revolutionaries of all stripes to grapple with. We hope that this video will inspire, compel people to act, help folks make sense of the situation, and force folks to grapple with their own organizing efforts and its relationships to the movements of black people fighting for their own liberation (whether or not they ascribe to the political formations of the traditional Left).

Interested in contributing to a media project that aims to let the marginalized tell their own stories? Got interesting content and want a platform to publish? Submit your content to us at austinautonomedia@autistici.org! We take all kinds of stuff–reviews, art, poems, analysis, news, reportbacks from events, and more–as long as they don’t violate our principles