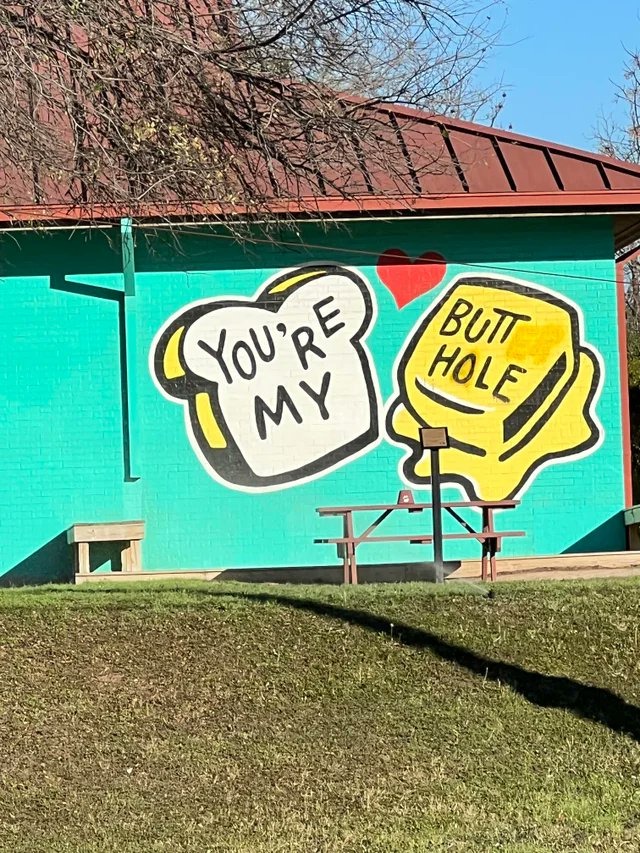 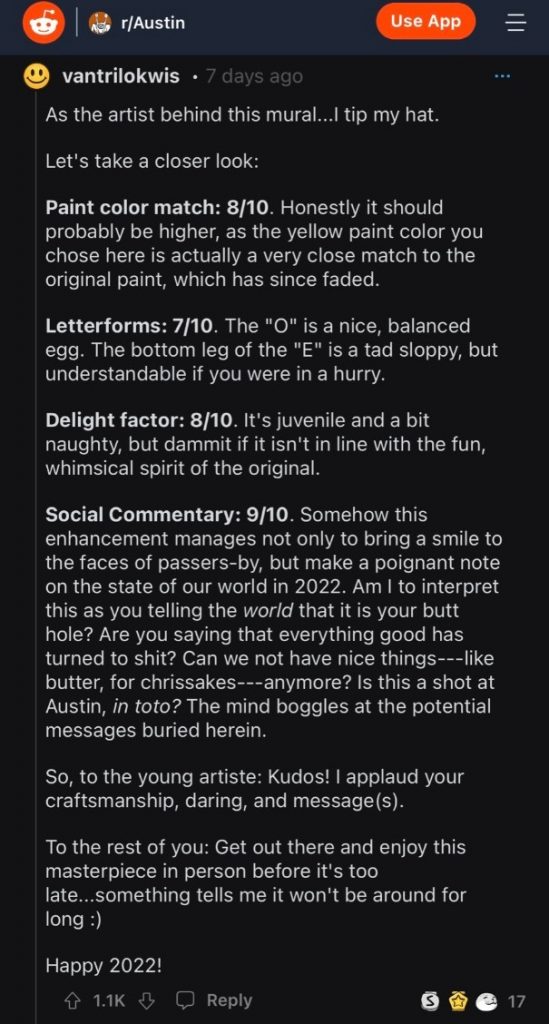 As the artist behind this mural…I tip my hat.

Paint color match: 8/10. Honestly it should probably be higher, as the yellow paint color you chose here is actually a very close match to the original paint, which has since faded.

Letterforms: 7/10. The “O” is a nice, balanced egg. The bottom leg of the “E” is a tad sloppy, but understandable if you were in a hurry.

Delight factor: 8/10. It’s juvenile and a bit naughty, but dammit if it isn’t in line with the fun, whimsical spirit of the original.

Social Commentary: 9/10. Somehow this enhancement manages not only to bring a smile to the faces of passers-by, but make a poignant note on the state of our world in 2022. Am I to interpret this as you telling the world that it is your butt hole? Are you saying that everything good has turned to shit? Can we not have nice things—like butter, for chrissakes—anymore? Is this a shot at Austin, in toto? The mind boggles at the potential messages buried herein.

So, to the young artiste: Kudos! I applaud your craftsmanship, daring, and message(s).

To the rest of you: Get out there and enjoy this masterpiece in person before it’s too late…something tells me it won’t be around for long 🙂 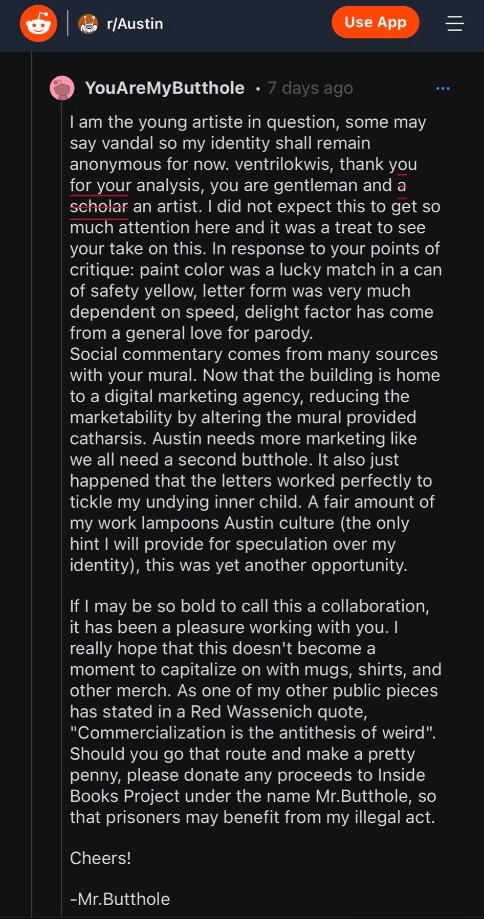 I am the young artiste in question, some may say vandal so my identity shall remain anonymous for now. ventrilokwis, thank you for your analysis, you are gentleman and an artist. I did not expect this to get so much attention here and it was a treat to see your take on this. In response to your points of critique: paint color was a lucky match in a can of safety yellow, letter form was very much dependent on speed, delight factor has come from a general love for parody.
Social commentary comes from many sources with your mural. Now that the building is home to a digital marketing agency, reducing the marketability by altering the mural provided catharsis. Austin needs more marketing like we all need a second butthole. It also just happened that the letters worked perfectly to tickle my undying inner child. A fair amount of my work lampoons Austin culture (the only hint I will provide for speculation over my identity), this was yet another opportunity.

If I may be so bold to call this a collaboration, it has been a pleasure working with you. I really hope that this doesn’t become a moment to capitalize on with mugs, shirts, and other merch. As one of my other public pieces has stated in a Red Wassenich quote, “Commercialization is the antithesis of weird”. Should you go that route and make a pretty penny, please donate any proceeds to Inside Books Project under the name Mr.Butthole, so that prisoners may benefit from my illegal act.

Defacement of “iconic” Austin murals as a commentary or attack on commercialization is not new, and this exchange prompted us to do some digging and thinking about it. Whether explicitly stated or not, we could understand much of the recurrent vandalism of murals in Austin, and the dominant response to such acts from businesses, artists, & the City, as part of a current of class conflict. First, a brief history of defacement in the 2010s.

The You’re My Butter Half mural was previously vandalized in 2017, though not are humorously. 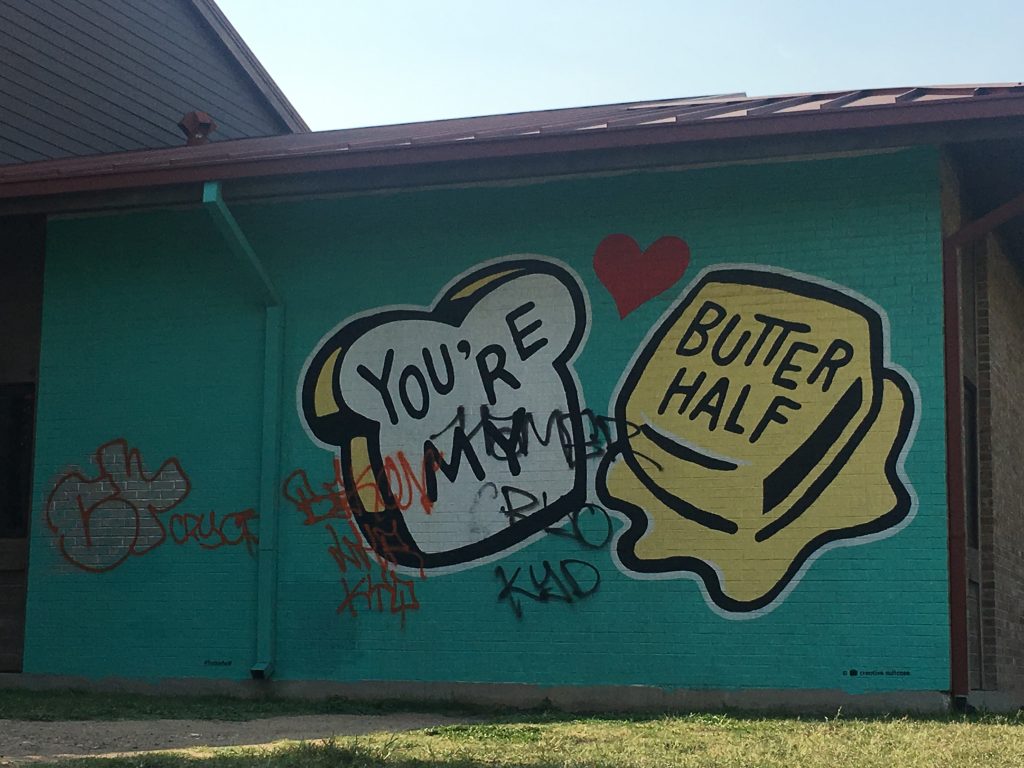 The “Greetings from Austin” mural on South 1st has been vandalized twice. Once in the summer of 2019, with a message telling visitors/potential newcomers to leave, again in the fall of 2019 with “Justice 4 Botham No Appeal.” The latter message came after the conviction of Dallas cop Amber Guyger for breaking into and killing Botham Jean in his own home in 2018.

In 2014, two prominent West Campus murals–one including a depiction of Stephen F Austin, the colonizer after whom the city is named–were defaced. 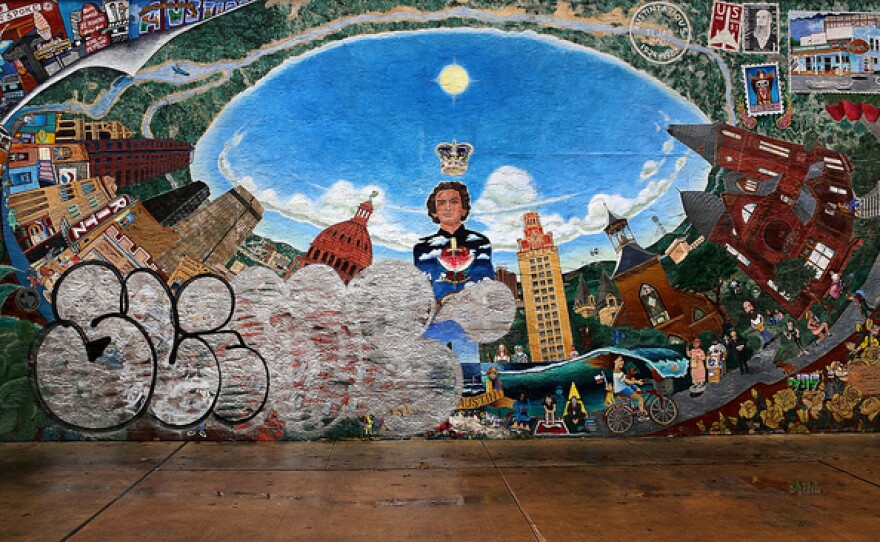 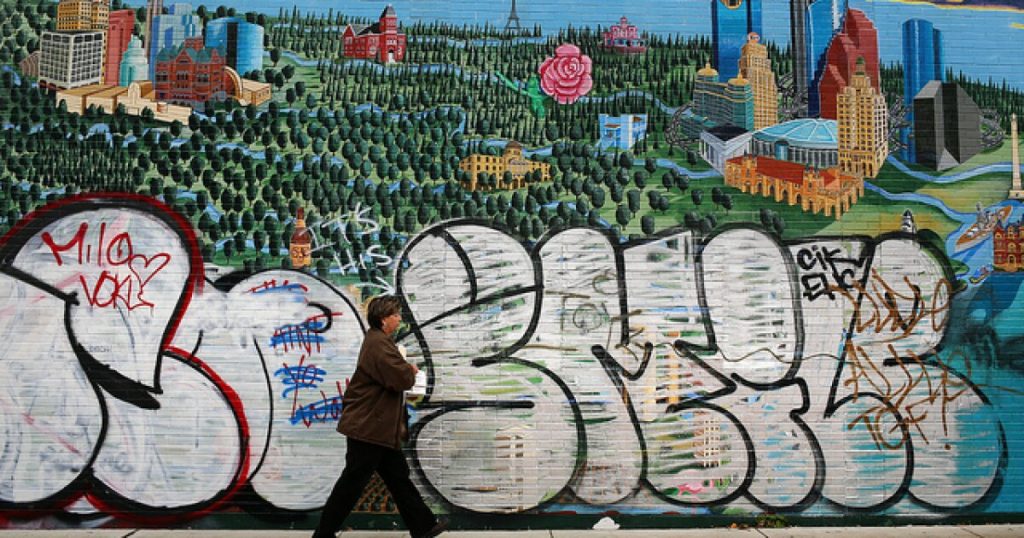 Across instances, the nature of the defacement ranges. Some are more explicit, expressing hostility (“Fuck Austin”) or a critique of development & commercialization (“i sold out”). One may take issue with the reactionary implications of graffiti telling “outsiders” (which ones?) to leave, or one may read it as a hostility to the ways development centered around tourists and attracting wealthy beneficiaries of industries like tech & entertainment. Others are more ambiguous, and might be (we would say mistakenly) read as apolitical.

The responses to the vandalisms also tell us much.

When the murals in West Campus were defaced, the marketing VP of the University Co-op said of the original mural:

“What is on the side of the building is art,” Jewell said. “It is not street art or graffiti. It was created by an artist.”

In the same Daily Texan article, another “street artist” is invoked to criticize the vandalisms:

Later in the article he says:

Nordstrom said he thinks the perpetrators have caused a series of copycat acts of vandalism.

From the perspectives of those who govern the city, of those who dominate its “arts community,” and of the police, these acts are crossing a crucial line. They are unregulated, unpermitted, delegitimized modes of expression. They sit on the wrong side of the lines of property, law, & value, and so are disqualified from being art.

We might read these various forms of graffiti as connected by an anti-political ethos, a more generalized hostility towards the existent social order in its varied forms–including property, the State, civility, and art. Attacks on murals which are a part of the City’s self-marketing effort are ways of intervening in the reproduction of Capital via Art. It runs against the interests of the arts community in Austin, which one might understand itself as a community of capital(ist art). They are often done with means easily accessible (spray paint), and while they often illustrate a great degree of skill & craft they do not require it–that is, one does not need to be a professional or evaluated as “good” to go fuck up a mural. Within this anti-political framework, we might understand recurrent vandalism of popular murals as part of an ongoing, low-level insurgency against the processes of capitalist development.

It is also important to juxtapose this to those “iconic” murals which are themselves destroyed due to processes such as gentrification. Two examples in recent memory–the erasure of a mural of iconic Black artists at E 12th & Chicon (which was later replaced with a new mural by the same artist) and of a Mama Sana/Vibrant Woman Mural at the same intersection (which was eventually repainted in north Austin). The erasure of these murals in 2017–the latter replaced with an corporate mural advertising Austin as the “Live Music Capital”–reveal a flip-side to this process, where development destroys historic art Austin’s dispossessed East Austin community (specifically, art by/for/depicting Black people).

Ultimately, we must understand art, and the broader economy of value which marks some creations as valuable (that is, able to generate value), some as illegitimate, and some as disposable, as effects of the capitalist nature of art. Perhaps it’s time for us to learn more about hating art, and so we end with some quotes on the idea:

Hatred of art, in the best and truest sense, has always really been disappointment that art can’t keep its own promises. The German philosopher Theodor Adorno once said: “The bourgeois want art voluptuous and life ascetic; the reverse would be better.” Hatred of art isn’t hatred of beauty. In fact it’s closer to the opposite. It’s hatred of capitalism for trying to make us accept the fact that we can only find beauty in art. Or in some other commodity, or some commodified experience. (On Instagram everyone lives in paradise.) Of course it’s also hatred of the people who buy and sell and talk about art, because they’re mostly rich assholes. Nothing mysterious about that. For academics, though, it’s a lot easier to come up with elaborate theories about iconoclasm than it is to admit that iconoclasm is usually quite easy to explain.

Got something you need to publish? Send it to us! We take all kinds of radical/revolutionary content, with a special affinity for anarchist/autonomous movements and crews. We specialize in research and strategic intelligence that can inform direct action, but we’ll take art, opinion pieces, and other stuff too! Submit content to austinautonomedia [@] autistici [dot] org.