Austin Autonomedia: Strategic Interventions in the Heart of Texas

A couple days ago, the comrades with the Screwston Antifascist Committee published a report from Central Texas Anti-Racist Action exposing Dustin Ray Hamby as a prominent leader in the Neo-Nazi group Patriot Front. We had previously published an article about Hamby, when he worked at UT as a cook. While he no longer works at UT, we wanted to fill in some details about his time at UT that became clear after this new article. Follow the link above to get the full story about Dustin’s activities, read below for the context for how UT actively ignored his racism. 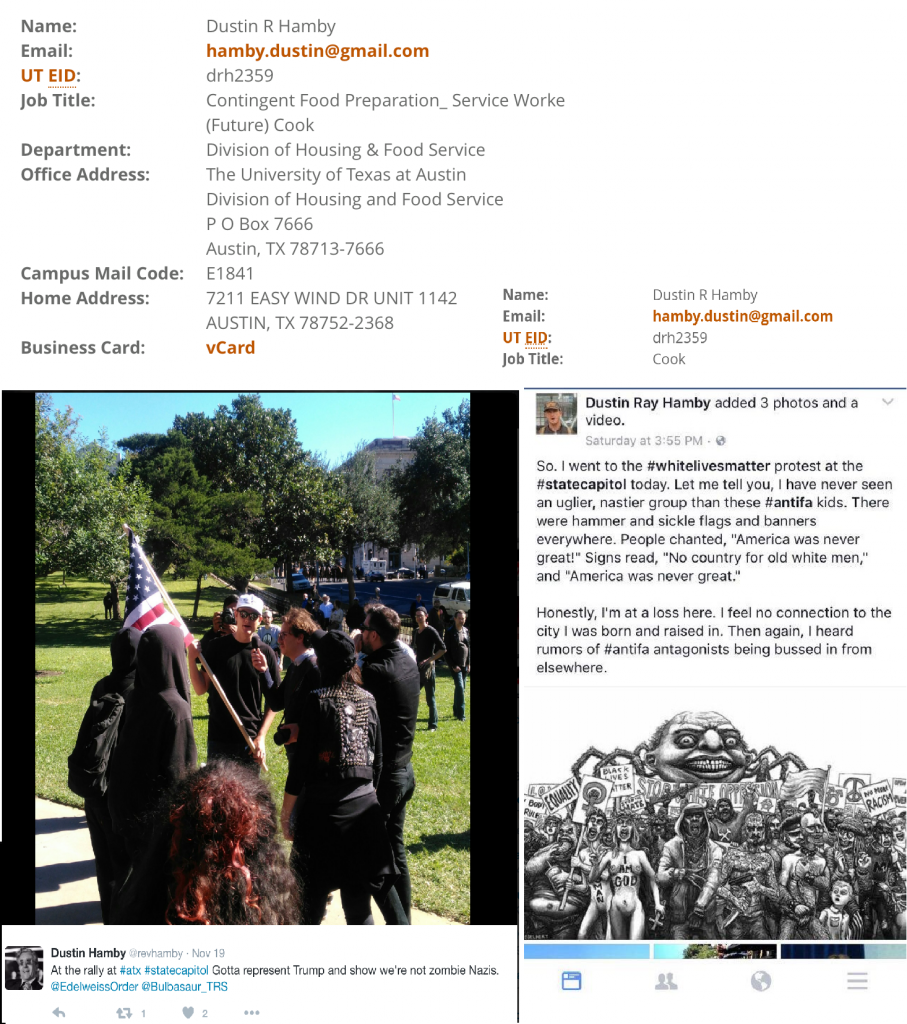 Shortly after we published our original article about Dustin Hamby, we were messaged by a former co-worker of his. They informed us that they had been aware of Dustin’s turn towards white supremacy and had made (unsuccessful) attempts to reach out and counter his radicalization. They then informed UT of Dustin’s politics, including his talk of the “final solution” and pictures of guns–things which have now been shown to be common threads among white supremacist mass shooters. 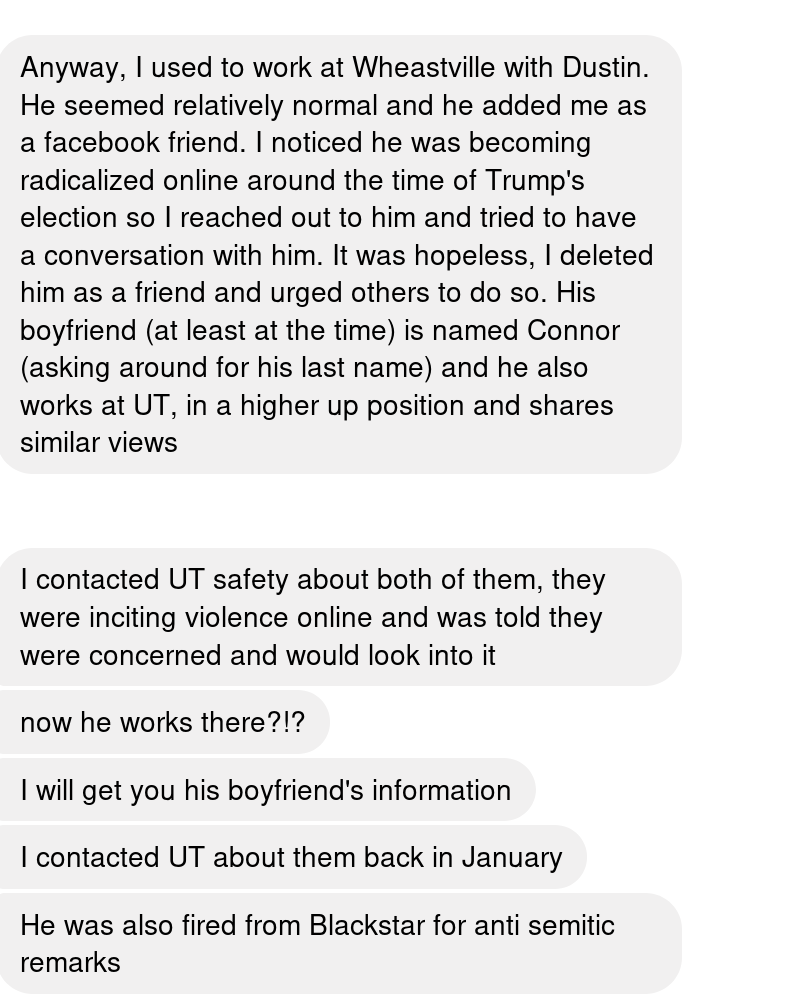 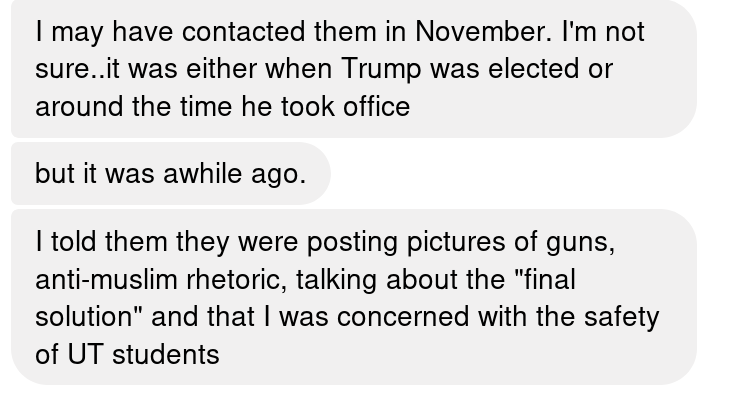 Evidently, UT did not take this risk seriously and employed Dustin. From our monitoring, Dustin was employed by Housing & Food Services for around a year after our original article, and then went on to work for a contractor with UT before finally leaving the UT system.  Additionally, Dustin’s former co-worker also informed UT about the similar politics of Dustin’s fascist boyfriend Connor Graham, who we also mentioned in our original article. 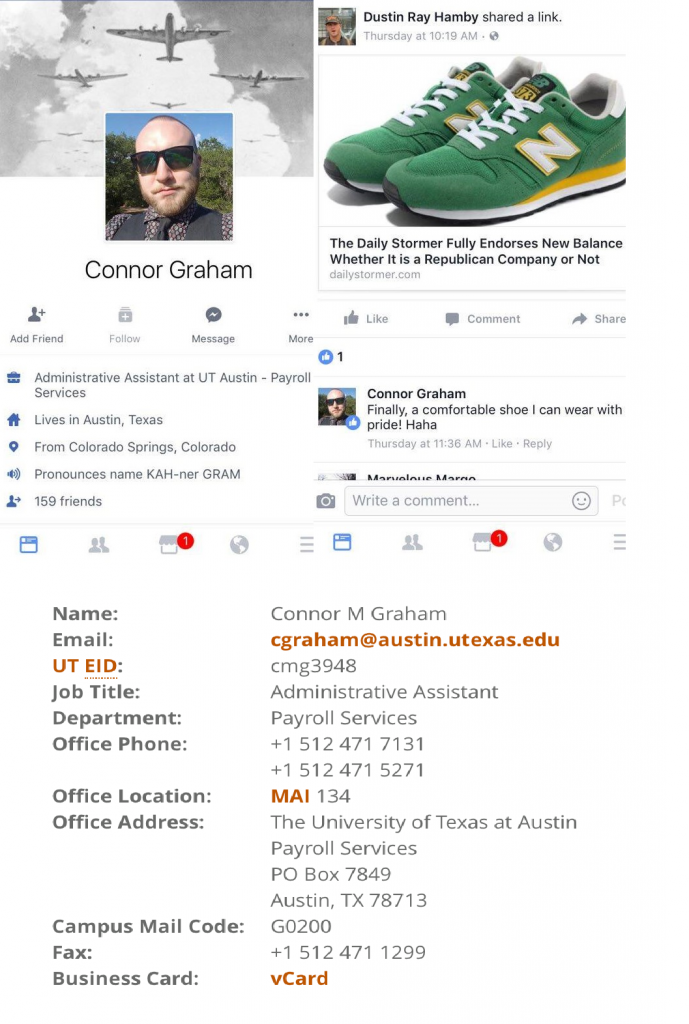 Connor Mitchell Graham, who currently lives with Dustin, has been employed by UT Payroll Services since November 2015. He is part of the Customer Service team for UT Payroll services, and according to the Texas Tribune’s Government Salaries Explorer receives an annual salary of $34,880.

Knowing what we know now about Connor & Dustin’s employment history at UT and their affiliation with Patriot Front, we can speculate and deduce some details about the past. In February 2017, UT was hit with a mass flyering campaign by American Vanguard–the group which, after one of its members drove a car into protestors at Charlottesville and killed Heather Heyer, rebranded as Patriot Front. Around this time, Austin antifascists were aware of an online Nazi named Chef Goyardee (Dustin Hamby’s alias on Twitter) as well. It’s very likely that, as someone who was present on campus and new the terrain, that Dustin was intimately involved in planning & executing American Vanguard’s–and later Patriot Front’s–flyering on campus. This adds to the weakness of UT’s response to the flyers–which failed to condemn the messages or name them as racist speech and made appeals to “free speech.” Not only were the flyers white supremacist in nature, they may have been posted by a Nazi employed by the University (or potentially two!) It’s also possible the two were involved in the torch light rally which Patriot Front staged on campus in November 2018.