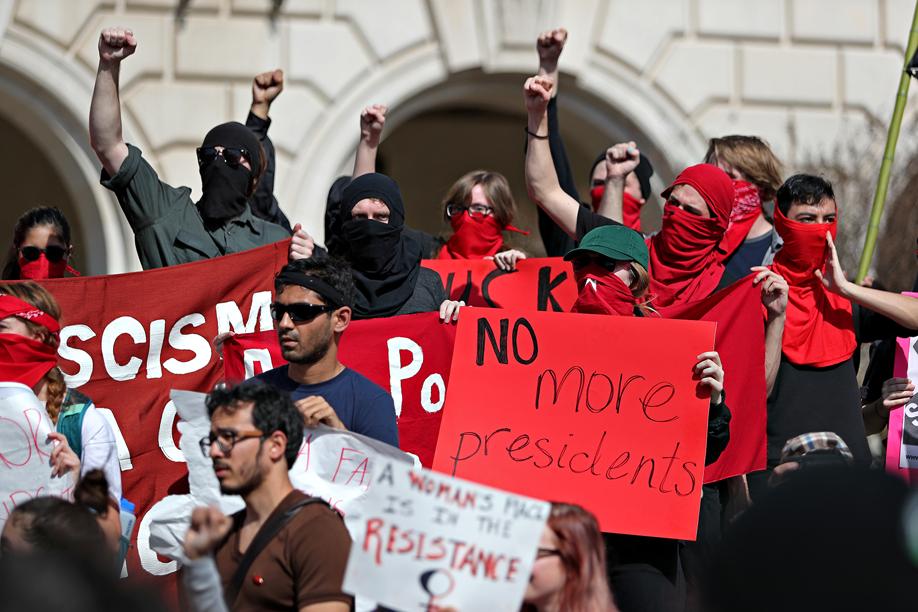 As these students got onto campus, they took center stage on the steps of the tower and, with their combined voices and megaphones, overshadowed and outshouted many of the more liberal and passive factions of the event. For about an hour they remained on the steps of the Tower, during which time the militant students made clear their intention to take the streets, shut shit down, and organize long term revolutionary forces. During the hour or so of speakers that had been lined up by the J20 UT event organizers, these students confronted neo-nazis, Trump supporters, and fascist-collaborators to keep each other safe and maintain the autonomy of the event. The event organizers meanwhile presented their list of demands, including initiatives such as divestment, sanctuary campus initiatives, and stronger protections for oppressed students. While seemingly radical, these demands said nothing of the types of movements and organizing that could mobilize students to pressure the university or any institution to provide them. The short-lived J20 organizing committee offered nothing but desires, pacifying students with the strength of their demands while killing the possibility of forming the networks that could truly increase student power and actualize these demands.

After this, the walkout turned into a march. While more militant members tried to lead it into the streets as soon as possible, other organizers were attempting to lead a parade around campus to stop and talk about various issues such as statues of Confederate generals and buildings housing military recruitment centers. A couple of times, this produced a visibly disorganized mass that often tried to split into two directions, before the militants would eventually have to reintegrate into the crowd and make their way back to the front to try again. The organizers of the campus march lead contradictory and confusing paths, as they turned away from an open path towards the streets and into a section of campus that was extremely narrow and blocked by construction barricades. They then attempted to return to the tower, taking an extremely inaccessible path for many disabled folks that were there participating. Finally, the militants were able to get the push necessary to get the students and organizers to come out onto the streets. 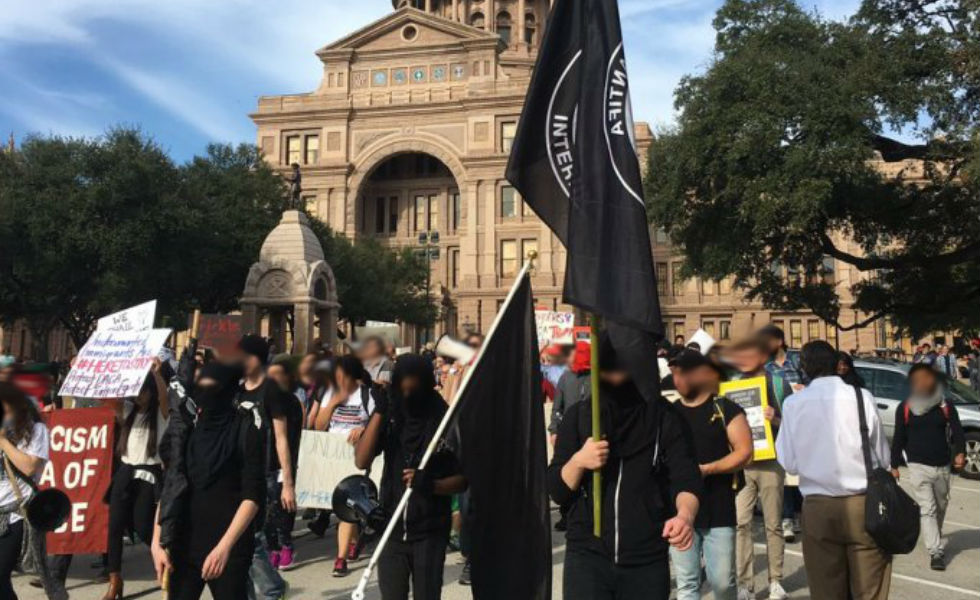 As the students marched, active efforts were made to keep the pace of the march slow so as the maintain a tight bloc and keep the event accessible for disabled folks. Workers, onlookers, and passerby vocalized their support as the students marched through the streets, shutting down traffic and forcing the police to reorganize the flow of the city. As the students marched downtown, concerns were raised by the more militant faction that the organizers were letting the cops parade them while minimizing disruption. Some militant made attempts to lead the crowd away through different streets, but would get shut down when those who had visibly declared themselves the organizers motion to continue forward. Having failed to present themselves as the most organized and leaders of the event, these impromptu breakaway attempts failed when the crowd deferred to the leadership of the event organizers. It was only after more discussion and convincing that the organizers went with the militants’ plan to loop around some streets in order to cause more disruptions. 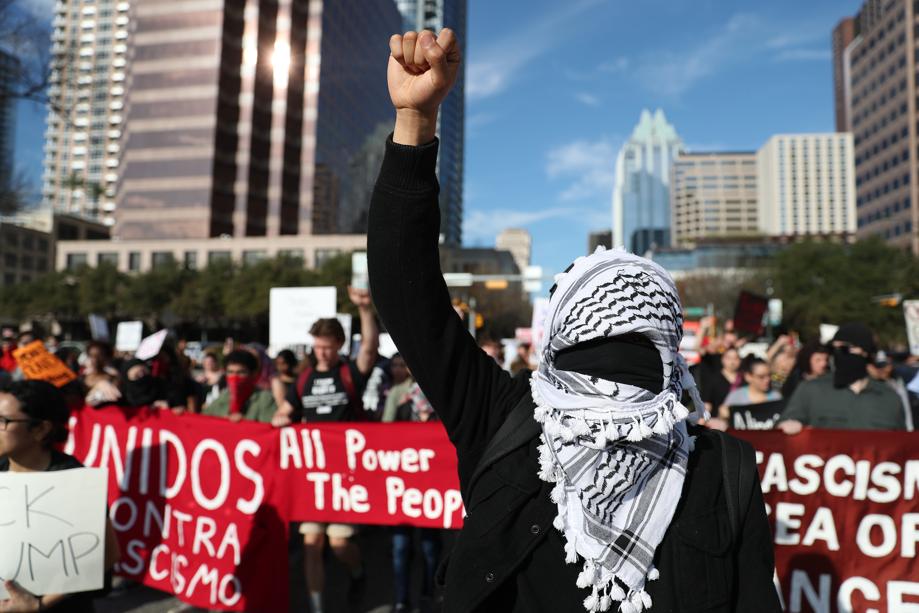 Finally, the student march began to reach its destination. The organizers had planned to meet up with the OneResistance march through Austin. The revolutionary students rejected this plan because of the OneResistance coalition’s collaboration with the police, including getting a parade permit and asking APD to protect the march from masked “communists” and “anti-police” forces. They instead met up across the street, where a bloc of anti-fascists, largely organized by Red Guards Austin, were rallying up to form a militant bloc that would integrate and attempt to push the OneResistance march in a more militant direction.

This bloc marched in a set formation, keeping itself tight and pacing itself, even if it meant being left behind by the OneResistance march. They brought anti-police, anti-capitalist, and revolutionary slogans to the forefront, with chants such as “Donald Trump go to hell, It is right to rebel” and “We’re here, we’re queer, we’re anarchists, we’ll fuck you up!.” As the OneResistance march was paraded around by the police, eventually not even making it to its planned goal of going to the Capitol, the militants made sure to keep a safe distance between them and the police and their collaborators. After coming back to the starting point of the march, the militants held their after party by bashing and burning a Trump piñata with flares in front of a larger crowd than they had begun the evening with. After this, they dispersed while OneResistance continued its ongoing list of ending speeches in a nearby park.

The events in Austin could best be described as attempts to chart new paths, attempts to find escape routes from Empire. When the students blocked the streets without authorization, when masses of students chanted radical slogans such as “One solution, Revolution” and “No justice, No peace, Take to the streets and fuck the police!” and when community militants made clear their total opposition to the police and institutional politics, one could find examples of the types of refusal, solidarity, and militancy that could produce an insurrectionary situation. Yet, at every stage this was also limited by those paths which became trapped within Empire, trapped within this society and all its apparatuses of capture. When the militants failed to take the crowd into the streets or change directions, when the radical student bloc was mostly integrated into the liberal OneResistance event, and when organizers were content with being corralled by or actively collaborating with the police, Empire was able to re-establish its control and maintain its basic premise: that nothing should happen.

These divides make clear what must be confronted going forwards. The enemies are not simply Trump, the pigs, and the neo-nazis, but also the liberals, reformists, and organizers that attempt to maintain control over the masses that they can bring out. In every instance, leaders served to shut down the potential insurrectionary energy of angry and vulnerable people. Organizers became obstacles to organizing ourselves. The fight against Trump’s world cannot simply be a fight for new leaders, it cannot be a fight for people like Clinton or Sanders or any other “radical” progressive. This fight must be the fight that can expand the numbers and energy of the black bloc, of antifa work, that can push people’s intensity and politics towards total non-negotiation and confrontation with this world.

In Austin, this means attacking the blue—the pigs, the liberals, the hipsters, and the “leftists” whose politics offers us no escape from this world. This means breaking with the infinite array of activist organizations which only offer us endless activity, an endless chain of marches, workshops, and policies that never get to the root of the violence this society thrives off of. This means refusing any who claim to represent any movement, group, or “The People,” no matter how “radical” the organization. Liberation will not come from an organization, activists, or a vanguard. Liberation will come through the self-organization of various peoples and autonomous relationships. The creation of new bonds and solidarities that amplify collective strengths, provide new means of living and fighting, and push people’s experiences and understandings of the world open up the horizon of insurrection.

The only question left to be answered is how this is to be done.

Until we find each other