In late July, flyers were spotted around so-called Austin. These flyers described and celebrated the various acts of expropriation (aka looting) that took place at the beginning of the uprisings in June. We’ve transcribed the text along with an image of the flyer for preservation and to help spread the message. 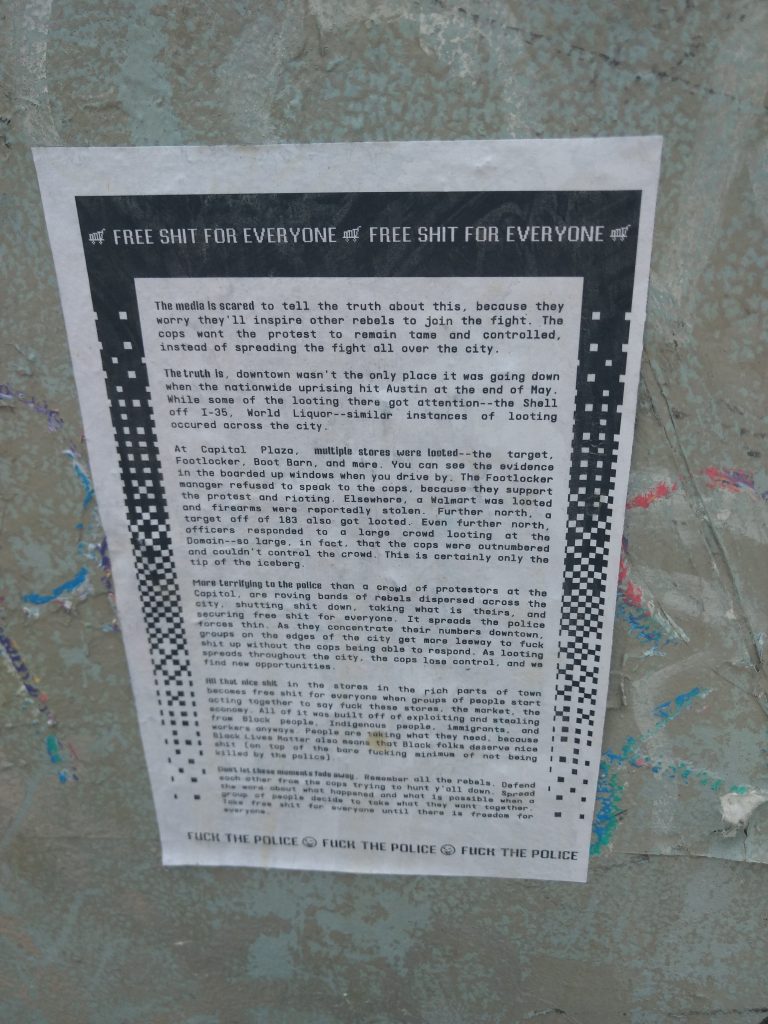 FREE SHIT FOR EVERYONE, FUCK THE POLICE

The media is scared to tell the truth about this, because they worry they’ll inspire other rebels to join the fight. The cops want the protest to remain tame and controlled, instead of spreading the fight all over the city.

The truth is, downtown wasn’t the only place it was going down when the nationwide uprising hit Austin at the end of May. While some of the looting there got attention–the Shell off I-35, World Liquor–similar instances of looting occured[sic] across the city.

At Capital Plaza, multiple stores were looted–the target, Footlocker, Boot Barn, and more. You can see the evidence in the boarded up windows when you drive by. The Footlocker manager refused to speak to the cops, because they support the protest and rioting. Elsewhere, a Walmart was looted and firearms were reportedly stolen. Further north, a target off of 183 also got looted. Even further north, officers responded to a large crowd looting at the Domain–so large, in fact, that the cops were outnumbered and couldn’t control the crowd. This is certainly only the tip of the iceberg.

More terrifying to the police than a crowd of protestors at the Capitol, are roving bands of rebels dispersed across the city, shutting shit down, taking what is theirs, and securing free shit for everyone. It spreads the police forces thin. As they concentrate their numbers downtown, groups on the edges of the city get more leeway to fuck shit up without the cops being able to respond. As looting spreads throughout the city, the cops lose control, and we find new opportunities.

All that nice shit in the stores in the rich parts of town becomes free shit for everyone when groups of people start acting together to say fuck these stores, the market, the economy. All of it was built off of exploiting and stealing from Black people, Indigenous people, immigrants, and workers anyways. People are taking what they need, because Black Lives Matter also means that Black folks deserve nice shit (on top of the bare fucking minimum of not being killed by the police).

Don’t let these moments fade away. Remember all the rebels. Defend each other from the cops trying to hunt y’all down. Spread the word about what happened and what is possible when a group of people decide to take what they want together. Take free shit for everyone until there is freedom for everyone. [emphasis added]